With Ground War Bogged Down, Ukraine Should Turn to Sea to Speed Russia’s Defeat 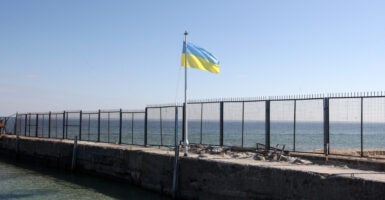 Ukrainian flag is seen at the beach of the Black Sea in the city of Odesa, Ukraine on 21 March. (Photo: STR/NurPhoto/Getty Images)

The war in the Donbas region between Russia and Ukraine is settling down to a series of small attacks and tenacious defenses.

Deliveries of  U.S. and allied military equipment are key but not in the quantities necessary to make them decisive. All this points to the conflict taking the form of a war of attrition.

This plays to Russia’s strengths, and the coming winter will test allies’ resolve to sustain the flow of critical munitions and economic sanctions while restrictions on Russian oil and gas will chill European industrial output and homes.

Ukraine with help in certain key areas could dramatically change the power balance by taking the initiative at sea. Granted this will never be a “navy versus navy” sea battle, but it could be decisive.

With the effective use of Ukraine’s own land-based Neptune anti-ship missiles in sinking Russia’s Black Sea flag ship the Moskva, and delivery of western anti-ship systems, Russia has had to adjust its naval operations. And, as ports in Crimea come within range of weapons like the HIMARS, Russia has shifted naval operations to the east out of range of Ukrainian weapons.

However, it is the Russian submarines that are impervious to the above weapons and pose the most persistent threat. Their continued employment of cruise missiles on Ukraine is the most visible, but their ability to attack Ukrainian shipping with impunity poses a greater danger.

Some respite from Russian blockade has been achieved with the first Ukrainian grain ship departing Odesa on Monday. Despite this small success, the danger to Ukraine’s exports from ports in the Black Sea remain under Russian threat. Specifically, from a small number of Russian submarines patrolling these waters, able to at-will hold Ukraine’s commercial livelihood hostage by serendipitously mining Ukraine’s harbors or attacking shipping with torpedoes.

Creative thinking is needed to put the four Black Sea Russian submarines at risk, which if neutralized are unlikely to be replaced as Turkey has shutout Russian naval reinforcements thanks to the Montreux Treaty.

To do this Ukraine needs to continue making limited progress on land to position its anti-ship missiles to effectively close down key Russian ports in Crimea such as Kerch and Sevastopol. Eventually perhaps long-range weapon systems could even hold at-risk Novorossiysk.  Getting the Russian submarines, however, requires a lot more effort.

Sadly, Ukraine doesn’t have a legacy anti-submarine capability today to build-on or transfer weapons they are readily familiar with.

So, new options are needed.

These include allies transferring anti-submarine mines that can be deployed from helicopters or small high-speed surface ships which Ukraine has – a very dangerous proposition given Russia’s defenses. A second option would be to transfer air-dropped torpedoes and anti-submarine sensors to Ukraine, the use of which will require extensive training. Finally, Ukraine could repurpose antiquated ASROC rocket propelled anti-submarine weapons for use in the Black Sea – this too is a heavy lift.

The ASROC missile system is a navy relic of the Cold War that has been deployed from numerous allied warships, including Greece and Japan. Targeting could be aided when Russian submarines give away their location by firing cruise missiles.

That said, the system has severe range limitations, but an effort to modify them for land-based use with improved range could be possible. This becomes an engineering project, one that the Pentagon’s Strategic Capabilities Office is ideally suited to undertake. Importantly, such modifications would also have utility in deterring a Chinese invasion of Taiwan, and is a capability the Marine Corps has called for previously.

Given the trajectory of the land war, more is needed to upset Russia’s ability to undertake a long war.  One way of doing this is by clearing the Black Sea of Russian naval forces, thereby dramatically changing the regional strategic balance.

Accomplishing this could be done, but certainly not without risk.