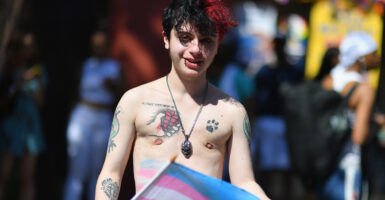 Have you ever seen a teacher who is just a little too interested in getting kids to talk about their sexuality? Or a government bureaucrat seemingly obsessed with pushing LGBT ideology into schools?

Then you’ve likely encountered what James Lindsay, a cultural commentator and frequent critic of LGBT activists, calls a “groomer.”

Lindsay, 43, is co-author of the book “Cynical Theories,” which highlights the decline in academic rigor in academia, as well as the rise of postmodernism. Lindsay, who lives in Tennessee, has been one of the loudest voices online exposing how activists are foisting LGBT ideology on unwitting children.

“The thing people think I’m accusing them of is predatory pedophilic grooming, the idea that adults are going to seduce children into sexual relationships,” Lindsay, founder of the website New Discourses, said in an interview with The Daily Signal.

“And that definition of ‘grooming’ has a lot of currency, and a lot of people recognize it,” he said. “[But], as it turns out, we’ve all collectively forgotten that cult grooming was something that we all talked about, up until this controversy [about LGBT activism] erupted.”

The phrase “groomer” recently has become popular online to describe the hordes of leftist activists bent on indoctrinating children into radical gender ideology. Oftentimes, there is a confluence between those activists and members of the LGBT movement.

“They are bringing up sexual topics with children, normalizing discussions of sex with children, telling children to hide it from their parents. These are all behaviors that if it was predatory pedophiles, we would immediately apply the word ‘groomer,’ but they’re doing it for cult purposes, using the same subjects.”

Lindsay’s criticism has made him a frequent target of leftist rage. Twitter has suspended Lindsay’s account on more than one occasion.

Additionally, after leftist groups complained that the term “groomer” was anti-LGBT, Twitter updated its rules against “hateful conduct” and announced that the word is now forbidden on the site.

“Use of this term is prohibited under our Hateful Conduct policy when it is used as a descriptor, in context of discussion of gender identity,” Twitter executive Lauren Alexander said, according to The Daily Dot.

Lindsay says, however, that the left’s instinct to ban the word groomer appears only to have made it more popular:

I don’t know what’ll happen in the long run, but in the short run, it’s backfiring. I got banned off Twitter, locked out for 12 hours last week for ‘OK groomer’ and subsequently ‘groomer’ trended on Twitter to like 40,000 tweets or some number thereabout. It made it more visible that something inappropriate is going on here, to which the label ‘groomer’ applies in one way or another. And they’re trying to hide it and protect it and cover it up.

In addition to calling for the censorship of supposed “anti-LGBT” content, Lindsay argues, the left is engaged in a campaign to persuade anyone who doesn’t 100% fit gender or sexual stereotypes that they are transgender:

With tomboys, they want young girls who don’t feel 100% girly-girl all the time to have a pressure on them. It’s to make girls, probably in the 11- to 14-year-old range, who might encounter this message feel uncomfortable with the fact that they’re a little bit boyish, and therefore maybe they’re actually a boy, to push them into transition.

Once those seeds of doubt are planted in a potential target, Lindsay said, the next step is to have them recite humiliating in-group creeds, such as stating their “preferred” personal pronouns or citing land acknowledgements, stating that the land Americans live on was stolen from Native Americans.

To Lindsay, these things are part and parcel of a communist attempt to reshape society.

Lindsay emphasized that the roots of the groomer problem run deep and are seeded with money from leftist organizations such as the Bill and Melinda Gates Foundation and the World Economic Forum.

The fight against the groomers must take a multipronged approach, he said. First, opponents must rip the practice out by the roots. That way, better values can grow in their place:

Where I come from in the Southeast, we always say that poison ivy is nature’s Band-Aid. Anywhere the tractor wheel scuffs, poison ivy’s going to be one of the first things that grows in. How do you keep it out? Well, you have nice grass … that keeps the poison ivy from being able to take root in the first place.

You have to cultivate and articulate and put out other values that crowd out the space [and] makes this [LGBT] stuff undesirable for people.