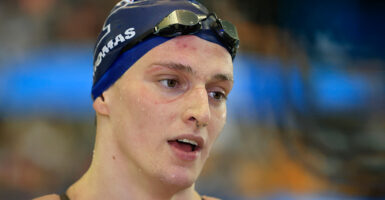 Lia Thomas, a biological male who was nominated for NCAA “Woman of the Year,” has been cheered on by the woke media and an administration keen on redefining gender and sex. Pictured: Thomas talks to a reporter after winning the 500-yard freestyle on March 17 in Atlanta. (Photo: Justin Casterline/Getty Images)

Lia Thomas was recently nominated as the NCAA “Woman of the Year.” Just one problem: Thomas is male.

Yet neither the “progressive media” nor the Biden administration sees this as problematic.

Thomas, a collegiate swimmer, declared to be a girl. The “woke” media wrapped him in praise when he exited the pool a Division I women’s champ earlier this year.

The administration did more than cheer. It has been working feverishly to redefine “sex” in federal law as something you choose, rather than something you are born with.

The administration’s most recent denial of biology comes from a proposal to interpret Title IX of the Education Amendments of 1972 to mean that you cannot discriminate against someone based on what they decide is their “sexual orientation and gender identity” instead of their actual sex.

If the administration is successful, girls could find themselves in bathrooms with biological boys. Female athletes could face a much greater risk of injury from boys who say they are girls.

Just ask the three young women hurt when body-slammed in a recent high school rugby match in Guam. Or, as in the Thomas example, girls could have their athletic achievements swiped away.

Some state lawmakers have already moved to protect young children who face serious risks from radical ideas about assumed “genders.”

Officials in states such as Florida and Tennessee have protected young girls by requiring boys to use boys’ bathrooms and locker rooms and compete on boys sports teams.

But with the Thomas nomination making headlines and Washington rushing to abandon biology, many parents and teachers are asking: What happens now?

Before the Biden administration can impose its anti-science definitions—definitions that disempower women—on the nation, it must first review thousands of public comments submitted in response to its proposal.

This will force the administration to explain why it wants to take a federal law adopted 50 years ago to protect women and use it to put them at greater risk.

There are legal questions, too. The chief attorneys from 21 states—nearly half of the U.S.—last year sued to block the proposed rule, arguing that the administration is trying to “go far beyond interpreting Title IX and instead seeks to rewrite it.”

They noted that, by redefining “sex” to include the ambiguous idea of “gender,” the proposal actually “undermines rather than interprets” a key part of federal law that was meant to empower women.

And don’t expect state education leaders to sit idly by while Washington tries to put children at risk. For example, Louisiana State Superintendent of Education Cade Brumley recently went on record saying, “We shouldn’t discriminate against any children in any school,” but “I don’t think it’s appropriate for biological males to be in little girls’ bathrooms.”

Noting that the proposed rule that changes the definition of sex is still under consideration and not official, Brumley also wondered why the Biden administration is acting as though the change has already been approved.

He notes that the U.S. Department of Agriculture is threatening to withhold money for school lunches for children from low-income families who are attending schools that do not allow boys to use girls’ bathrooms or do not force teachers to use pronouns that do not match a child’s sex.

Thomas’ dreams of being named NCAA Woman of the Year collapsed Monday, when the honor was bestowed on an actual woman: Columbia University fencer Sylvie Binder.

But Biden still wants to cram radical ideas into our schools, ideas that assault a pillar of women’s rights: Title IX.

Thankfully, his agenda has not one problem, but many: state officials around the U.S. who are defending children.