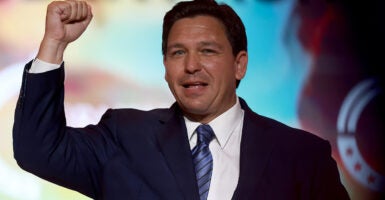 It’s way too early to talk about the 2024 presidential campaign, but it cannot be staved off any more than you can stop Jim Acosta from yelling. Liberals are already alarmed about the press strategy of the Republican contenders.

New York Magazine posted David Freedlander’s article “Why Republicans Stopped Talking to the Press.” This headline is inaccurate, unless you think the liberal press is the only press. But it’s true that Republicans are wising up to the ardently editorializing, anti-“false balance” liberal press.

“I just don’t even see what the point is anymore,” said an adviser to one likely GOP aspirant, who requested anonymity to discuss strategy. “We know reporters always disagreed with the Republican Party, but it used to be you thought you could get a fair shake. Now every reporter, and every outlet, is just chasing resistance rage-clicks.”

Another consultant agreed, saying the rise of Twitter has given Republicans “a direct view into the id of every political reporter in America.”

Freedlander correctly deduces that sitting down with the “mainstream press” is now seen as “consorting with the enemy,” and their approval is the “political kiss of death.” See anchors like Jake Tapper asking Rep. Liz Cheney if she will run for president.

Some liberals are naturally bitter. “Fundamentally, they don’t want to have to defend Donald Trump and his falsehoods about the election,” said Jeremy Peters of The New York Times. That’s certainly true. A candidate could say they believe Joe Biden is the legitimate president, and yet the liberal press will inevitably want to make the entire race about Trump, election denialism, and Jan. 6. Who would find that gauntlet a productive avenue for victory?

A primary race should cause Trump-skeptical Republicans to be more aggressive in telling voters that Trump’s failure to concede defeat makes him unelectable, and dwelling in the past won’t lead to victory. But there are many important problems in the country that have been exacerbated under Biden, from inflation to immigration to crime.

Just try to imagine another John Harwood-style moderator handling a Republican debate. In 2015, all the Republicans turned on Harwood for his obvious bias. This is why the Republican National Committee rightly signaled it wouldn’t submit to another cycle of abuse from the Commission on Presidential Debates.

Instead, it’s a commonly held Republican belief that a hit piece from the liberal media is much better than a puff piece.

Take CBS “60 Minutes” correspondent Sharyn Alfonsi harassing Florida Gov. Ron DeSantis about his COVID-19 response at a press conference as part of their hit piece. This is the same show in which Steve Kroft slobbered over Barack Obama so many times that they put together a slobbery DVD after their favored candidate won in 2008.

“My message to them is to try crying about it. Then go to kickboxing and have a margarita,” DeSantis spokeswoman Christina Pushaw replied on Twitter, mock-quoting a comment previously made by then-White House press secretary Jen Psaki. “And write the same hit piece you were gonna write anyway.”

In a world full of right-leaning websites, podcasts, and talk shows, why should Republican candidates be interviewed by people who hate them, any more than Democrats submit to Fox or Newsmax or the New York Post?

Obviously, a Republican nominee who needs more than Republican votes can broaden the press strategy when the general election phase begins. But Democrats should be pressured to take on at least as many hostile interviewers or debate moderators in any presidential race as Republicans do.