Monkeypox Primarily Affects Gay Men. Why Are We Scared to Say It? 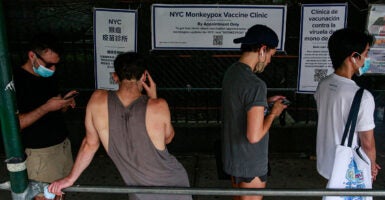 The data is clear. Gay men are the most at risk for contracting monkeypox. Why are we pretending otherwise? Pictured: Men wait in line July 17 to receive the monkeypox vaccine in Brooklyn. (Photo: Kena Betancur/AFP/Getty Images)

Monkeypox seemingly sprung out of nowhere to infect large swathes of the globe, replacing COVID-19 as the malady du jour. Experts say the number of monkeypox cases is severely undercounted, and the World Health Organization just declared the disease a global health emergency.

Monkeypox has hit America particularly hard. Our nation has the most recorded cases on Earth, with nearly a third centralized in New York City.

So, are we due for a new plague on par with the coronavirus?

According to the data, not unless you’re a gay guy.

A study published in the New England Journal of Medicine reported that 98% of those infected around the world were gay or bisexual men who were having sex with other men.

That seems to indicate definitively that a specific demographic is more at risk for contracting monkeypox than others.

Yet the messaging strategy surrounding monkeypox seemingly has sought to obfuscate this fact. Buried under a mountain of menus on the Centers for Disease Control and Prevention website is this nugget specifying who should get vaccinated: “Currently, this outbreak is largely affecting gay, bisexual, or other men who have sex with men.”

And even when they do say something about how monkeypox almost exclusively infects gay men, public health officials couch their language by citing a nonexistent stigma against gay men as the reason.

World Health Organization chief and leftist hack Tedros Adhanom Ghebreyesus said: “The stigma and discrimination can be as dangerous as any virus and can fuel the outbreak. As we have seen with COVID-19 misinformation, this information can spread rapidly online.”

To be fair to Ghebreyesus, he did offer a pathetic plea asking gay men to stop sleeping around before chiding people for stating the obvious about who gets sick with this disease.

“For men who have sex with men, this includes for the moment, reducing your number of sexual partners, reconsidering considering sex with new partners, and exchanging contact details with any new partners to enable follow up if needed,” the World Health Organization’s director-general said.

In a post-COVID-19 world, that sort of handwringing appeal for people to change their behavior falls flat. It’s unacceptable after public health officials used government to force individuals the world over to lock down, mask up, and get vaccinated against their will.

Medical tyrants such as the National Institutes of Health’s Dr. Anthony Fauci seemed perfectly willing to stigmatize those who wanted to maintain their freedoms as “anti-science,” and more than one unmasked American was accused of being a grandma-killer.

So now we care about hurting people’s feelings? Spare me.

This isn’t even the first time that political sensibilities got in the way of an effective public health response.

Long before monkeypox or the novel coronavirus, there was AIDS.

The 1980s saw mass panic surrounding this new and deadly illness. Although the average American had no idea who could contract the HIV virus that causes AIDS, it was clear to many health experts that the disease disparately affected gay men.

So naturally they lied and said it affected everyone.

In a 1983 article, a younger Fauci declared that children and heterosexual adults were at risk of contracting AIDS, as there existed “the possibility that routine close contact, as within a family household, can spread the disease.”

In 1996, The Wall Street Journal reported on the consequences of the decision to pretend everyone could get AIDS, to spare the feelings of gay men.

“The emphasis on the broad reach of the disease has virtually ensured that precious funds won’t go where they are most needed,” the Journal wrote nearly 30 years ago. “For instance, though homosexuals and intravenous drug users now account for 83% of all AIDS cases reported in the U.S., the federal AIDS-prevention budget includes no specific allocation for programs for homosexual and bisexual men.”

It’s time to stop beating around the bush when it comes to public health. Dire ramifications arise when politics seep into health care.

How many thousands of lives could have been impacted if Fauci hadn’t injected his own personal politics into the COVID-19 debate? How many businesses could have been saved from ruin if they had just been able to stay open? How many families could have said their goodbyes to loved ones, or attended personal milestones such as the birth of children?

The numbers of lives touched by the politicization and selective enforcement of pandemic policies stack up quickly.

And what happens when the next serious infection that affects everyone warps around the globe? Well, sorry, Fauci et al., your credibility is shot. Americans saw how you treated COVID-19 and how you’re treating monkeypox, and decided they were better off on their own.

The Centers for Disease Control and Prevention and the World Health Organization may think they’re being kind by ignoring the big gay elephant in the room. But their behavior is making things much worse than they need to be.

One would think that after two years and plummeting trust in world health bodies, a little soul-searching would be in order. But apparently not.

If public health officials won’t say it, then we should.

Monkeypox poses the greatest threat to gay men. Ignoring that fact is bananas.