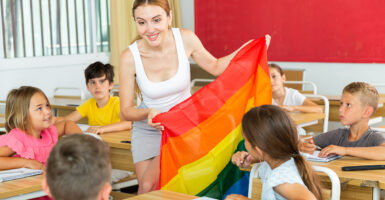 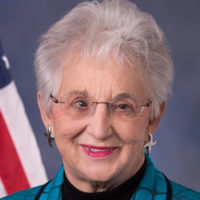 Virginia Foxx is the U.S. representative for North Carolina's 5th congressional district. She is the Republican leader of the Education and Labor Committee.

Many school districts across the nation are actively resisting curriculum transparency measures and bending over backward to hide the truth about what students are being taught.

As parents sound the alarm on critical race theory and gender politics in the classroom, school administrators are doing everything in their power to gaslight them—telling them that these topics aren’t being taught and calling parents who question them racist or transphobic.

The teaching of radical ideologies, including critical race theory, is becoming pervasive throughout the country, but nowhere is it pushed on students more forcefully than in California. For example, the state-mandated Ethnic Studies Model Curriculum is chock-full of leftist propaganda.

It is no surprise that a California school board member recently called for a boycott of the Fourth of July. And while it is still concerning, it is no longer surprising that dozens of schools named after Founding Fathers like George Washington are facing renaming battles. While I support removing statues of figures who actively fought for racism or other evils (like leaders of the Confederacy), trying to erase our Founding Fathers is a different story.

California is not an outlier on these issues. Look north to Seattle and you will find school districts that proposed spending more on “racial equity” programs than on math and science, despite a steep decline since the pandemic in math and reading scores. Additionally, 56% of Seattle students were found not to be competent in science.

In classrooms all around the country, the controversial and historically inaccurate 1619 Project is being utilized to teach that our country’s core value is not equality but racism. According to a RealClearInvestigations report, critical race theory is pervasive in many schools and is found in professional development courses for teachers and staff as well as in lesson plans and assignments.

Instead of lying directly to parents, many of these schools are hiding controversial curricula by giving programs seemingly innocuous names like “culturally responsive teaching” or using so-called social and emotional learning to smuggle in controversial material.

According to a Fox News report, one of the more egregious ways school districts are hiding curricula from parents is by charging exorbitant fees for public records requests. Nicole Solas, a mother from South Kingstown, Rhode Island, requested the curriculum of her daughter’s kindergarten class. After being denied this request and exhausting every other option, Solas filed a Freedom of Information request for which the district reportedly charged her $74,000.

This was not an isolated incident. The Oregon Department of Education charges $10 per email, and in one instance, it charged a parent $1,525 for a single document.

Parents are not the only ones facing such high fees: journalists are subject to them, too. A journalist in Iowa who sought information related to “Transgender Week” at Linn-Mar High School in Marion was told that his request would cost $604,000. Using such exorbitant fees to dissuade parents and journalists from accessing public records is an abuse of power and a tactic clearly intended to keep parents in the dark.

These school districts are disregarding parents’ rights to have a say in their children’s education. The belief that the education bureaucracy, not parents, should decide what children learn is a growing and concerning trend. For example, in his race for Virginia governor, Democratic candidate Terry McAuliffe said parents should not influence what schools teach. Nikole Hannah Jones, 1619 Project founder, seemingly agreed, saying, “K-12 educators, not parents, are the experts in what to teach.”

And what happens when parents fight back, affirming their right to know what their children are being taught? The entire force of the education bureaucracy, including teachers unions and federal institutions, turns against them.

For example, the Rochester Community School District in Rochester, Michigan, was accused of monitoring the social media accounts of 200 parents. In one case, the district was forced to pay $190,000 to a parent who had advocated on social media for a return to in-person learning. The district had contacted her employer, leading to her termination.

Lest we wonder if these are isolated incidents, we recall that the National School Boards Association asked the Biden administration to use counterterrorism tools to investigate parents at school board meetings.

Parents are also being targeted for opposing the left’s gender ideology. Throughout the country, parents who refuse to provide “gender-affirming care” to their children risk losing custody or being accused of child abuse.

We already know that forcing such an agenda can have tragic consequences. In Florida, a 12-year-old girl attempted suicide twice after being given secret gender-transition counseling at school. Why weren’t her parents told about their daughter’s transition or her counseling? According to her father, it was because of his and his wife’s Catholic beliefs.

Parents aren’t the only ones in danger. Just last month, the Fairfax County School Board in Virginia voted to increase punishments for students who “misgender” or “deadname” their peers—that is, calling them by their given name or the pronouns that correspond with their biological sex rather than their newly chosen name and pronouns.

Things could get worse. Under President Joe Biden’s proposed changes to Title IX regulations that were originally meant to protect women and girls from sex discrimination in K-12 and higher education, it won’t be long before such actions could be considered sexual harassment.

This is where the country is headed, but we can take action to stop this train. The Parents Bill of Rights will protect parents’ rights to make medical decisions for their children rather than letting schools usurp that authority. It will also create more transparency so parents can see how schools are spending money and what their children are being taught.

Safeguarding parental rights is the line drawn in the sand. If we lose this battle, the consequences for individual liberty will be wide ranging and devastating.