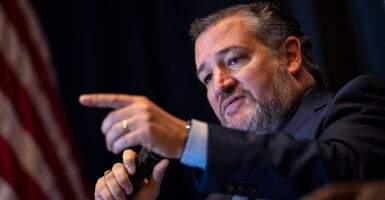 The Texas Republican, who was joined by Rep. Byron Donalds, R-Fla., and Kellyanne Conway, former senior counselor to President Donald Trump, noted that a poorly educated child is at a much higher risk of facing poverty, crime, and drug addiction later in life. These risks plummet when children are well-educated, Cruz explained.

Throughout his nearly 10 years in the Senate, Cruz has focused on school choice. He amended the Senate’s 2017 tax reform bill by extending 529 college savings plans, which provide certain tax advantages for savings accounts used for education, to elementary and secondary school tuition. This amendment also applied to private and religious schools.

His efforts to rally his colleagues in 2017 proved successful: all 50 Republican senators voted in favor of the amendment. Sen. Joe Manchin, D-W.Va., initially favored it as well. But once he sat down, a “sea of Democrats descended upon him,” Cruz said.

“Rather sheepishly,” Cruz explained, “Manchin changed his vote from a yes to a no.”

The Senate was split 50-50. Late that night, Vice President Mike Pence broke the tie and the Student Opportunity Amendment passed and was later enacted.

Cruz said this victory was “the single most far-reaching federal school choice act ever adopted in law.”

Cruz, however, criticized Democrats for their positions on school choice. The Texas senator said that school choice has gained traction among parents in every state—especially among Hispanic and African American voters. Democrats’ opposition to school choice is “indefensible,” Cruz remarked.

Cruz further criticized Democrats, saying they remained in the pocket of teachers unions. “They don’t give a damn that large numbers of blacks and Hispanics support school choice,” he added.

In his remarks, Donalds related schools to other businesses. Like any other business, Donalds explained, schools want market share. But public schools face no external pressure to improve in quality and efficiency.

“Compare this with telecommunication,” said Donalds. “Imagine if the government provided your phone. You’d still be using a Motorola StarTAC.”