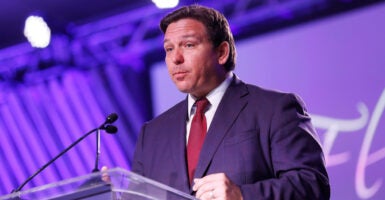 Florida Gov. Ron DeSantis, seen here speaking at the inaugural Moms for Liberty Summit on July 15 in Tampa, Florida, is taking action against a bar that exposed young children to drag queens and other sexual content. (Photo: Octavio Jones/Getty Images)

Florida is suing a bar that hosted drag shows with children present after investigators found that the establishment was exposing minors to sexually explicit content, according to documents obtained by The Daily Caller News Foundation.

Florida Gov. Ron DeSantis, a Republican, discussed the complaint and spoke out against sexualized content targeting children during a Wednesday speech in Tampa on environmental, social, and corporate governance.

“It used to be–people have different views about what they want to do as adults—but it used to be, you know, the kids are off-limits,” DeSantis said. “No one wanted to bring the kids into any of this stuff, and we’ve got to get back to that.”

Florida is attempting to revoke the liquor license at R House, a Miami-area bar, through a complaint that details numerous incidents in which children were allegedly exposed to explicit sexual content there with the full knowledge of the bar.

In one instance, a male dancer wearing G-string underwear stuffed with dollar bills with his buttocks fully exposed paraded a young girl aged about 3 to 5 through the restaurant while holding her hand, the complaint alleges.

In another instance, a presumably male dancer gyrated and pole-danced in revealing women’s clothing while waving dollar bills, the complaint alleges. R House was not only aware that children may be present during such performances, but it also offered a children’s menu for kids 12 and under.

“There was a video out of Dallas where they had all these young kids putting money in the underwear of these drag queens at a bar, and that’s totally unacceptable,” DeSantis said. “A week or two later there was video from a place that had similar stuff and then that was identified as being in Florida.”

“Having kids involved in this is wrong. That is not consistent with our law and policy in the state of Florida and it is a disturbing trend in our society to try to sexualize these young people,” he said. “That is not the way you look out for our children. You protect children, you do not expose them to things that are inappropriate.”

A spokesperson for DeSantis’ office shared a copy of Florida’s complaint against the bar and did not comment further. R House did not immediately respond to The Daily Caller News Foundation’s request for comment.