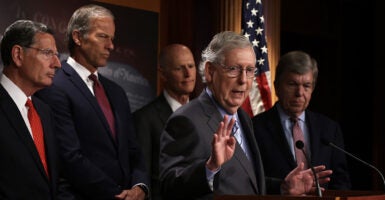 Conservative leaders are calling on senators to reject the House-passed Respect for Marriage Act, which aims to codify into federal law the Supreme Court’s 2015 legalization of same-sex marriage in Obergefell v. Hodges.

“The Act, which was suddenly rushed through the House without any public hearings or input, is an attack on millions of Americans, particularly people of faith, who believe marriage is between one man and one woman,” wrote more than 80 conservative leaders, along with the legal advocacy group Alliance Defending Freedom, in a letter Tuesday to Senate Minority Leader Mitch McConnell, R-Ky.

The letter writers believe the bill would threaten the religious freedom rights of individuals and groups across the nation if it becomes law.

While the bill “does nothing to change the status of, or benefits afforded to, same-sex marriage in light of Obergefell, it does much to endanger people of faith,” they wrote.

The authors of the letter noted that Supreme Court Justice Samuel Alito correctly predicted the Obergefell ruling would “be used to vilify Americans who are unwilling to assent to the new orthodoxy,” as the justice wrote in his dissent to the 2015 case.

The Respect for Marriage Act, the conservative activists argued, could “require federal recognition of any definition of marriage without any parameters whatsoever.” They also fear that the bill, should it pass the Senate and be signed into law by the president, would encourage left-wing activist groups to sue individuals and organizations who do not conform to HR 8404’s definition of marriage.

It pointed to the case of Barronelle Stutzman, a florist who was sued by Washington state after she declined to create floral arrangements for a same-sex wedding. Alliance Defending Freedom petitioned the Supreme Court to take up her case in 2017. Four years later Stutzman settled her case and went into retirement after the high court declined her appeal on two occasions.

The authors of the Conservative Action Project statement also cited the cases of bakers Jack Phillips and Aaron and Melissa Klein, in Colorado and Oregon, respectively, who were sued for refusing to design cakes for same-sex weddings.

The statement authors fear those cases are only the beginning, writing: “The Court’s decision in Obergefell unleashed religious freedom violations across the land, launching a new era of harassment and coercion of millions of Americans who hold a sincere religious belief or moral conviction that marriage is, or ought to be, between one man and one woman.”

The Conservative Action Project’s statement garnered signatures of more than 80 conservative leaders, many of whom also signed the Alliance Defending Freedom’s letter to McConnell. The signers include Edwin Meese III, Ronald Reagan distinguished fellow emeritus at The Heritage Foundation; the Family Research Council’s Perkins; and Terry Schilling, president of the American Principles Project.

According to the statement, the Respect for Marriage Act would not only “increase the threat of legal liability for those who decline to affirm same-sex marriage, but it would help cement a ‘national public policy’ on same-sex marriage that would have drastic consequences.”

Commenting on the coalition letter to McConnell, Farris remarked:

Despite claims from its sponsors, the so-called ‘Respect for Marriage Act’ doesn’t simply codify the Obergefell decision. It forces the federal government to recognize without limit any marriage definitions that a state adopts.

It also empowers the government to punish millions of Americans who hold decent and honorable beliefs about marriage—beliefs that have existed since time immemorial—exposing citizens to predatory lawsuits and even endangering the nonprofit status of faith-based organizations.

The following is a full list of those who signed the Alliance Defending Freedom’s letter to McConnell:

Katy Faust
founder and director, Them Before Us

Gillian Richards is a journalism fellow.