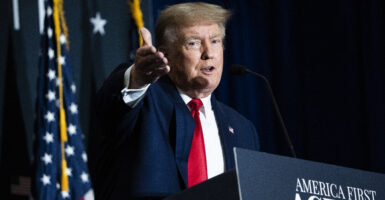 “Everything this corrupt establishment is doing to me is about preserving [their] power and control over the American people,” former President Donald Trump says Tuesday in a speech to the America First Agenda Summit at the Marriott Marquis hotel in Washington. (Photo: Tom Williams/CQ-Roll Call, Inc /Getty Images)

Former President Donald Trump focused mostly on fighting a surge in crime and keeping Americans safe but veered into other topics Tuesday in remarks packed with policy proposals that topped 90 minutes.

“We need an all-out effort to defeat violent crime in America and strongly defeat it, and be tough and be nasty and be mean if we have to,” Trump said in a late afternoon speech that saw him return to Washington for the first time since his last day as president.

The 45th president spoke at the America First Agenda Summit, a gathering at the Marriott Marquis hotel sponsored by America First Policy Institute, the think tank established by former Trump administration and campaign officials. The hotel is less than 4,000 feet from the White House.

Here are seven major takeaways from his speech, during which Trump characteristically departed often from his written remarks.

Trump said major drug traffickers are responsible for about 500 deaths each and should be executed upon conviction for those lost lives.

“If you look at countries throughout the world, the ones that don’t have a drug problem are those that institute a very quick trial and death-penalty sentence for drug dealers,” Trump told the crowd.

“It doesn’t take 15 years in court. It goes quickly,” Trump said. “You execute a drug dealer and you save 500 lives because they kill on average 500 people.”

Trump cited Singapore and China as examples of countries with no drug problems where drug dealers are put to death.

“It’s terrible to say, but you take a look at every country in this world that doesn’t have a problem with drugs, [and] they have a very strong death penalty for people who sell drugs,” Trump said.

Predicting that the death sentence would be a deterrent to major drug dealers, Trump said: “If we had that, in one year deaths would go down 50%—5-0.”

Referencing the sometimes deadly riots in summer 2020, Trump said governors and mayors did not enforce the law and tried to prevent the federal government from doing so.

“If radical politicians at the state and local levels refuse to protect public safety and instead turn criminals on the loose to prey on the innocent, then the federal government will have no choice but to step in, not wait for the governors anymore,” Trump said.

“I was mandated: ‘Wait for the governors.’ Sometimes I didn’t do that. I was watching too many things happen,” he said, recalling the riots following the murder of George Floyd, a black man, by a white Minneapolis police officer. “In Minneapolis, Minnesota, if we didn’t send in the National Guard, they wouldn’t have a city left.”

With all of the problems we have, we are not going to wait any longer. We are going to pass legislation to go in and help those people under siege and have governors that don’t know what they are doing. Under these circumstances, the federal government has the right to do what they want to do.

It is a duty for us to use every tool, every authority and constitutional power at our disposal to defend the citizens of our country if we have a weak, foolish, and stupid governor that is allowing the kinds of things you saw take place. We have to be able go in and clean [it] out quickly.

3. ‘Most Persecuted Person’ in U.S. History

Trump said the ongoing investigation of the Capitol riot by a mostly Democrat House committee is an extension of previous attacks on him.

“A friend of mine said recently that I was the most persecuted person in the history of our country,” Trump said. “I said he may very well be right.”

Trump talked about the lengthy Russia investigation, after which special counsel Robert Mueller found no evidence of collusion between the Russian government and Trump’s 2016 campaign.

He also talked about his first impeachment by the House, the one over his phone call with Ukraine’s president.

“Now we have the Jan. 6 ‘un-select’ committee of political hacks and thugs. These are the same people we’ve been dealing with for four years,” Trump said of his term in the White House.

Trump ridiculed Rep. Adam Schiff, D Calif., who has been involved in every major House investigation of Trump and is on the nine-member select committee investigating the events of Jan. 6, 2021.

He also took a swipe at the only two Republicans on the select committee, Reps. Liz Cheney of Wyoming, who is vice chairman, and Adam Kinzinger of Illinois, in dismissing the panel’s seven Democrats as his past political opponents.

“We have the same people [who have investigated before], other than Cheney, who is the worst, and crying Adam Kinzinger,” Trump said.

Trump contrasted the lack of prosecutions after the summer 2020 riots organized largely by Black Lives Matter and Antifa activists, with the heavy-handed prosecutions of accused Jan. 6 rioters, including some people who were only on the Capitol grounds and didn’t enter the building.

“What a sad thing. Something has got to happen, because people are not going to take it much longer,” Trump added. “There’s two sets of justice.”

He hinted about his future political plans amid widespread assumptions that he will run to regain the presidency in 2024.

“Everything this corrupt establishment is doing to me is about preserving [their] power and control over the American people,” Trump said. “They really want to damage me so I can no longer go back to working for you. I don’t think that is going to happen.”

Trump focused at some length on the country’s growing homelessness problem, particularly in the nation’s capital.

“No civilized society turns over its public spaces to be dominated by drug addicts and the homeless no matter what the reason may be,” Trump said. “If liberals think it’s somehow compassionate, let them invite the homeless to camp in their backyards, soil their property, attack their family, and use drugs where their children are trying to play.”

Saying it was different when he was president, he made some unexpected assertions.

“The only way you are going to remove the hundreds of thousands of people—and maybe throughout the nation millions of people—and make our cities clean, safe, and beautiful again is open up large parcels of inexpensive land in the outreaches of the cities,” Trump said, adding:

Bring medical professionals, including doctors, psychiatrists, psychologists, drug rehab specialists. Build permanent bathrooms and other facilities—make them good, make them hard, but build them fast. And create thousands and thousands of high-quality tents, which can be done in one day.

You have to move people out. Some people say that’s so horrible. No. What’s horrible is what’s happening now, because now they are in tents that hardly function. …

It will be the ambition of these people and all of us to get their life back on track, leave the tent city and be back into the mainstream of society, which is where they want to be. It’s a great thing.

Trump briefly talked about the COVID-19 pandemic that began to erode his presidency in 2020 and the disagreements he had with Dr. Anthony Fauci, longtime director of the National Institute of Allergy and Infectious Diseases.

“They said, ‘There is a terrible thing happening in China.  There are a lot of dead people laying all over the streets,’” Trump recalled of first hearing early that year about the new coronavirus that causes COVID-19.

He remembered moving relatively quickly to close off travel from China to the United States.

“Shortly after that, I closed it up long before Nancy Pelosi wanted it, or any of these people, including Fauci,” Trump said.

“I used to listen to Fauci and whatever he said, I did the opposite,” the former president quipped. “We closed it up and then we had to close [travel] to Europe or we would have had a much worse situation.”

6. ‘Open Borders Are a Gaping Wound’

To secure the United States, Trump told his audience, the nation’s borders must be secured. He said President Joe Biden shut down the border security measures, including construction of a wall, that he had put in place.

“Our open borders are a gaping wound allowing drugs, gangs, child traffickers, human smugglers, and tens of thousands of dangerous criminals to pour into our country. That’s every week when you hear tens of thousands [unlawfully crossing the border],” Trump said.

We have no idea who is coming in, but we do know [other countries] are emptying their jails. Last week, we had 141 countries represented by people that came into our country illegally. We don’t know who they are or where they’re from. We know nothing about them.

Many of these people that are coming in will cause trouble for this country, the likes of which you have no idea, [including] terrorists sending people into our country that will cause problems for us for decades.

Trump urged Congress to pass historical civil service reforms to ensure that nonperforming federal bureaucrats may be fired in a relatively short amount of time rather its taking years and years.

“To drain the swamp and root out deep state bureaucrats, we need to make it much easier to fire rogue bureaucrats who are deliberately undermining democracy, or at a minimum just want to keep their jobs, want to hold onto their jobs,” Trump said, adding:

Congress should pass historic reforms empowering the president … to ensure that any bureaucrat who is corrupt, incompetent, or unnecessary for the job—you ever heard this—‘You’re fired. Get out. You’re fired.’ You’ve got to do it. Washington would be an entirely different place.

Trump said the appeals process in any attempt to fire a federal employee who isn’t a political  appointee has three stages, and each stage takes about five years to complete.

“To fire someone who is doing a bad job, if the government wins, will take 15 years under our current system,” he said.