DC’s Solution to Illegal Immigrants Bused From Texas: ‘Put Them on Train to Miami’ 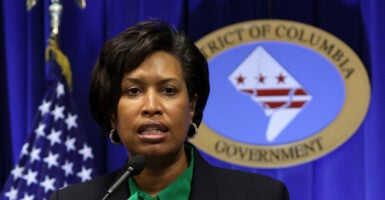 D.C. Mayor Muriel Bowser, a Democrat, pictured here March 14, has criticized the Republican governors of Texas and Arizona for transporting illegal immigrants to the nation’s capital after federal officials allowed the migrants to cross the southern border into the U.S. (Photo: Alex Wong/Getty Images)

Editor’s note July 25: In emails Monday, a D.C. Department of Health spokesperson and FEMA’s press secretary responded to The Daily Signal’s original report published July 22. This developing story has been updated to reflect their comments.

After expressing alarm in April about the arrival in the nation’s capital of a bus carrying illegal immigrants from Texas, a D.C. health official forwarded to colleagues language he said was from the Federal Emergency Management Agency stating that those who weren’t greeted by family would be “put on a train” to Miami.

The Heritage Foundation’s Oversight Project obtained emails and other records from the D.C. Department of Human Services regarding city officials’ response to Texas Gov. Greg Abbott’s busing of illegal immigrants to the District of Columbia from the southern border.  (The Daily Signal is Heritage’s multimedia news organization.)

In his emails about the arrival of a bus carrying migrants, D.C. health official Patrick Ashley wrote April 13 that “a bus HAS arrived as of this morning.”

“Some were picked up by family members and the rest will be put on a train to Miami,” Ashley wrote in another email to colleagues, sent less than an hour later.

A D.C. Health Department spokesperson said Monday that these words in Ashley’s follow-up email were part of a message from FEMA that Ashley simply forwarded as an “update.”

The reference to a FEMA email in media and social media published on July 25th appears to be part of a situation update, without context, published on or about April 13.  The email is reiterating what is happening on the ground at that snap-shot in time. The email does not state FEMA policy now or then. The email does not in any way suggest that FEMA was putting people on trains to Miami, which was not the case then, nor has it ever been the case.

The D.C. Department of Human Services and the D.C. Health Department did not respond Friday to inquiries from The Daily Signal, before this article first was published, about whether officials followed through on transporting illegal immigrants from the District to Miami.

In response to an inquiry Monday regarding who wrote the text that Ashley sent April 13 to colleagues in city government, a D.C. Department of Health spokesman said in an email: “The email excerpt you provided was originally written by a Federal Emergency Management Agency (FEMA) representative and Mr. Ashley was simply copying and pasting that email. For more information on the content of the email, please contact FEMA.”

The D.C. government did not provide the name of the FEMA representative, nor did FEMA’s Edwards.

The D.C. government records, which Heritage’s Oversight Project obtained through the Freedom of Information Act, include indications that city officials based plans on wishful thinking, making the District ill-prepared from the start to handle the volume of illegal immigrants being bused in.

Del. Eleanor Holmes Norton, a Democrat who is the District’s nonvoting representative in Congress, announced legislation that would send more federal emergency money to the District to provide housing or other shelter for illegal immigrants.

Bowser said the migrants were “tricked” into boarding a bus to Washington, D.C. This claim appears to diverge from D.C. officials’ earlier belief that illegal immigrants would use the city as a “lily pad” before jumping to another location.

It appears that D.C. government officials had followed the news closely regarding Abbott’s April 6 declaration that Texas would begin busing illegal immigrants to the District of Columbia.

By April 8, two days after the Texas governor said so, D.C. officials had a plan of action. That day, Ashley, deputy director of the D.C. Health Emergency Preparedness and Response Administration, sent an email to colleagues with the subject line “Texas Migrant Bus Convoy.”

“As you may have heard on the news,” Ashley wrote, “the Texas governor has plans to send undocumented immigrants who volunteer from Texas to the ‘U.S. Capitol’ in protest of the lifting of Title 42, which could increase the number of persons presenting to Texas at the border.”

In that same email, Ashley said Catholic Charities was “actively working against the Texas governor’s plan and encouraging individuals to stay in Texas.”

The D.C. Department for Human Services was “the lead entity for this event,” Ashley wrote, noting also that he had been on a call with officials from the U.S. Administration for Children and Families, a division of the U.S. Department of Health and Human Services.

“[T]hey indicated that it is likely that these individuals will only be in D.C. for a short period of time to use D.C. as a lily pad, as most individuals who cross the border [go] where they have friends or family support,” Ashley said in the email.

Placing the illegal immigrants on a train to Miami appears to have been the back-up plan, and perhaps a politically motivated, preemptive move against Florida, where Gov. Ron DeSantis, a Republican, is a proponent of border security. Miami Mayor Francis X. Suarez also is a Republican.

In his April 8 email, Ashley cited “rumors of Florida embarking on a similar plan to send individuals to Delaware.”

Delaware is the home state of President Joe Biden, a Democrat who represented it in the Senate for 36 years.

Putting illegal immigrants on a train to Miami also seems to contradict the D.C. government’s official line for the public.

In his second related email April 13, Ashley wrote: “D.C. plans to rely on Catholic Charities of Arlington, Va., to support, although Catholic Charities has indicated that they do not have a huge bandwidth if we start receiving many busses [sic].”

But in an ABC News story published April 14, the mayor’s press secretary, Susana Castillo, was quoted as saying:

Our administration continues to work with NGOs [nongovernmental organizations] who are providing resources to the arriving individuals and families. Our partners were able to triage the first bus, which included individuals hoping to settle outside of the region. Not surprising, D.C. shelters are now filling up due to a lack of a plan to house these illegal immigrants.

Politicians elsewhere sometimes have been quick to criticize, and even lecture, border state governors for responding to the crises in their states. But the documents obtained by the Oversight Project demonstrate that D.C. officials were not eager to welcome a new population from south of the border.

But Texas and other border states argue that they have had little chance to prepare for the massive border crisis on their doorstep.

As Abbott stated in an April 6 letter to Chief W. Nim Kidd, head of the Texas Division of Emergency Management: “Texans cannot continue to shoulder the burdens imposed by open-border advocates in other parts of the country.”