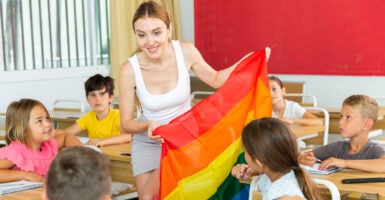 The largest public school district in California is teaching a curriculum promoting transgenderism and gender theory to children, according to public documents.

For example, the district hosted a virtual conference that featured a panel of “queer 7th graders” to advise parents on what their “queer middle schoolers want you to know,” the documents showed. The conference also included a presentation encouraging queer athletes to “come out.”

A workshop on “International Transgender Day of Visibility” said “history has a disturbing way of elevating certain voices while silencing others,” the documents showed. The presentation focused on raising awareness for the transgender community to achieve “trans justice.”

The “Standing with LGBTQ+ Students, Staff and Families,” run by school administrators, taught “local social justice engagement” and gave out free “gender-affirming clothing,” the documents stated. Teachers were instructed how students can be “Muslim and Trans” and taught how to address different “religious objections” to gender theory.

A trans-affirming calendar, deemed “Queer All School Year,” featured different pride events in each month such as the “Standing With LGBTQ Students Conference,” according to the documents. The training program “Queering Culture & Race” promoted the abandonment of gendered expressions such as “boys and girls.”

I have obtained a trove of documents from the district’s Human Relations, Diversity, and Equity department, which has created an entire infrastructure to translate the basic tenets of academic Queer Theory into K-12 pedagogy. pic.twitter.com/9vYlOoEXWh

Teachers in the district are instructed to address a student by their chosen name and pronouns, and are not permitted to alert the parents of the student if they change, the documents said. Students were also told they can use any pronouns, including “tree” or “ze.”

The school also established a “gender neutral dress code and school uniform policy” as an “elimination of barriers,” the documents stated.

More than 600,000 students attend the K-12 education in the school district that includes more than 115 schools and campuses, making it the second-largest district in the nation, according to the school’s website.