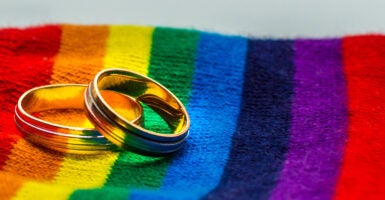 More than 3 out of 4 House Republicans voted Tuesday against a Democratic bill that would codify the right to same-sex marriage in federal law, but 47 voted for it. (Photo: Anastas/ iStock/Getty Images Plus)

The bill, dubbed the Respect for Marriage Act, passed the House of Representatives 267 to 157. All 220 Democrats voted in favor. Seven Republicans abstained.

The Respect for Marriage Act would formally repeal the 1996 Defense of Marriage Act, which recognized marriage as “only a legal union between one man and one woman as husband and wife.” The 1996 law was effectively invalidated by the Supreme Court’s 2015 ruling in Obergefell v. Hodges, which legalized same-sex marriage nationwide, but it has remained on the books.

In the House floor debate Tuesday, Judiciary Committee Chairman Jerrold Nadler, D-N.Y., stated the bill would “reaffirm that marriage equality is and must remain the law of the land.”

Democrats, who control the House, pushed the bill in response to the Supreme Court’s June 24 decision overturning Roe v. Wade, which returned the right to abortion back to the states to decide. They claimed it was necessary in the event the high court might someday consider also overruling Obergefell or Loving v. Virginia, the 1967 decision outlawing state bans on interracial marriage.

Ahead of the vote, Rep. Chip Roy, R-Texas, tweeted: “Tonight, a large number (a majority?) of the @HouseGOP is poised to vote FOR formal, legislative recognition of gay marriage while hiding behind interstate recognition of interracial marriage (a solution in search of a problem), allowing Dems to deflect from their failures.”

Rep. Jody Hice, R-Ga., tweeted: “Today I voted NO on H.R. 8404, the ‘Respect for Marriage Act.’ It’s a slap in the face of our federalist system that is just the latest effort to impose their leftist agenda on the entire country.”

While more than 75% of House Republicans voted against the bill, some expressed support for it.

We just passed the Respect for Marriage Act out of the House. I’m a big fan of marriage, having done it a few times. And if gay couples want to be as happily or miserably married as straight couples, more power to them. Trust me on this.

The bill’s prospects are questionable in the Senate, where it faces the likelihood of a filibuster.

The following are the 47 Republicans who voted in favor of the bill: