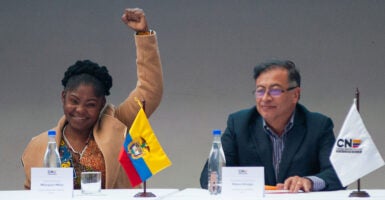 Luke Posegate is a member of the Young Leaders Program at The Heritage Foundation.

Gustavo Petro, a Marxist ideologue who was a part of the M-19 guerrilla organization, is the most recent in an ever-expanding list of far-left leaders winning elections in South America. He is set to take office Aug. 7.

Traditionally, Colombia has been a staunch ally and friend of the United States, so this is a devastating setback for the advancement of freedom and liberty in Colombia and other nations in the region. But the real beneficiary is the Chinese Communist Party with the ever-growing threat it poses to the U.S.

On a recent episode of the “Heritage Explains” podcast, Mike Gonzalez discussed how the “Marxist hurricane” blowing across South America has already affected Chile, Argentina, Honduras, Peru, and Colombia, with Ecuador and Brazil potentially following suit. (The Daily Signal is the news outlet of The Heritage Foundation.)

Gonzalez talks about how this is a Marxist plan, in which Marxists infiltrate institutions in order to shift the culture, and how it is being carried out and supported by Venezuela and its patron communist regime in Cuba.

“It understands the nature of culture, where you have to first take over cultural institutions before you take over the economy and the country. … [T]he situation is dire,” Gonzalez said.

This increasingly dire situation gets more complicated when you see that it opens the door wider for the Chinese Communist Party to increase its presence in the Western Hemisphere.

We already know China has been making incredible financial commitments in Colombia, including winning the bid for construction of the Bogota subway, and in other South American countries. Colombia is not currently party to China’s Belt and Road Initiative, unlike 20 other countries in Latin America and the Caribbean, but that could change.

Through these projects, China invests billions of dollars in infrastructure projects globally. These projects result in increased Chinese influence and greater access to ports and natural resources, and help shape Beijing’s global image.

Our Heritage colleagues write: “China is steadily increasing its political and economic influence in Colombia to complement its presence in Venezuela. … China will now exercise influence over critical infrastructure in Colombia’s capital and largest city.”

In addition, China’s trade relationship continues to grow in the Latin American region. In 2021, trade with China totaled $450 billion, and economists predict that figure will grow to $700 billion by 2035.

But even more concerning is the growing Chinese military threat in our own backyard.

According to a recent report, Venezuela will host China, Iran, and Russia for a joint military operation called Sniper Frontier in August, with the goal of positioning forward-deployed military assets in Latin America. This will be the first time these powers have conducted military operations in the Western Hemisphere.

This is not the first time China and other malign powers have partnered with the Venezuelan military. We know that in addition to military collaboration, China has provided anti-ship missiles, K-8 combat planes, and People’s Liberation Army-run satellite tracking for a military airbase.

While Gonzalez is concerned about how close in proximity to the United States these exercises are, he’s even more concerned with the Biden administration’s weak response, and whether it has a plan to counter the growing Marxist threat, most recently displayed in Colombia.

“Unlike [former President Ronald] Reagan, who came to the aid of democracies in Latin America when they were equally threatened by communists, [President Joe] Biden is unlikely to do anything,” Gonzalez said.

That concern is reflected in Biden’s appeasing response to Petro’s win. While it took current Colombian President Ivan Duque months to receive a call from Biden, and Brazilian President Jair Bolsonaro did not speak with Biden for more than a year until after he threatened to boycott the Summit of the Americas, Biden called Petro less than a day after his victory.

On behalf of the United States, I congratulate the people of Colombia for making their voices heard in a free and fair presidential election. We commend the many officials, public servants, and volunteers whose dedication made these elections possible.

Inasmuch as the recent election in Colombia is another warning sign that the “Marxist hurricane” in South America is becoming ever-stronger, we can see that the Chinese Communist Party and its threat to our liberty continues to expand ever-closer to the United States.

Let’s hope our leaders in Washington find the courage and strength to counter this threat with a real plan, before it’s too late.