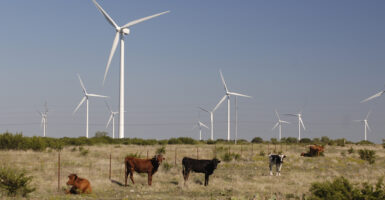 When politicians push subsidies and mandates to force a shift away from fossil fuels to renewables, they threaten not just Texas but the entire U.S. electric grid. Pictured: Cattle graze at the Buffalo Gap Wind Power project south of Abilene, Texas. Wind power projects have replaced oil wells on the skylines of many West Texas counties. (Photo: Robert Daemmrich Photography Inc, Corbis/Getty Images) 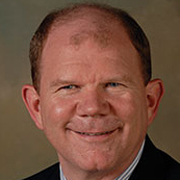 Texans might be forgiven for thinking they have it better than the Brits when it comes to keeping the lights on. After all, they live in the energy capital of the world. However, the destructive nature of renewable energy like that used in Great Britain knows no borders, especially when American politicians push subsidies and mandates to force us off fossil fuels, threatening not just Texas but the entire U.S. electric grid.

Just a few days after the British were warned they might have to lower their thermostats and delay their dinners this winter to avoid blackouts, Texans were advised last Monday and Wednesday to conserve energy as summer temperatures peaked.

The Electric Reliability Council of Texas, the grid manager for most of Texas, issued a conservation appeal to Texans and Texas businesses as last week’s temperatures were expected to top 105 degrees.

Yet the high temperatures were not all that unusual for Texas this summer. So even though demand was pushing to near-record levels, the primary reason for the call for conservation was “wind generation [that] is currently generating significantly less than what it historically generated in this time period.” On Wednesday, some forced traditional outages and lower solar output (due to West Texas cloud cover) also contributed.

Renewables—wind and solar—have come to dominate Texas’s electricity market. For years, coal and natural gas had been the leading sources of electric generation. Over the last two years, though, renewables have topped both, with wind leading the way.

But not last week.

Since the push for renewables in Texas began in 1999, electric generators have spent about $66 billion building wind and solar farms that have a generation capacity today of 46,949 megawatts, with wind accounting for 35,162 of those megawatts.

Yet as temperatures and Texans’ need for electricity were soaring, wind turbines across the state were still; and last Monday, they were producing about only 8% of their installed capacity. Operating reserves—the backup generation needed to keep air conditioners blowing and factories working—were shrinking.

Something very similar happened last year during the unprecedented 2021 blackouts when 10 million Texans went without power and 12 million without water, many for several days, during freezing temperatures. Energy analyst Robert Bryce noted at the time, “Roughly 17% of [wind’s installed] capacity was available when the grid operator was shedding load to prevent the state’s grid from going dark.”

It should also be pointed out that solar’s contribution to the grid during those pre-dawn hours was zero.

Thankfully, last Monday and Wednesday, the Texas grid did not fail. The wind began to pick up in the afternoons, allowing the state to avoid any blackouts. Yet the lesson learned is clear: During periods of extreme cold and heat, Texans have become deeply dependent on the wind and the sun to keep the lights on.

Why did energy-savvy Texas build an electric grid dependent on such unreliable energy sources? The answer is simple: Since 2005, renewable energy subsidies and benefits from federal, state, and local governments have totaled about $23 billion in Texas. As a result, investors have thrown $66 billion at renewables, chasing $1 of guaranteed return for every $3 invested, regardless of the price they get for their electricity.

Additionally, the Biden administration is doing everything it can to make investments in fossil fuels unprofitable. From bans on pipelines and drilling to the Securities and Exchange Commission’s proposed rule on environmental, social, and governance investing that would force businesses to disclose uncertain risks due to climate change, it is becoming more difficult and expensive to run afoul of the green agenda.

Despite these costs, renewables are still far more expensive and less efficient in practice than fossil fuels and nuclear energy. For instance, with wind operating at only 8% of installed capacity last Monday, about $51 billion of the $56 billion invested in Texas wind turbines produced nothing just when Texans needed power most. While investors profited, Texas consumers and taxpayers were paying billions for a grid on the verge of blackouts.

On the other hand, imagine if the $56 billion spent on wind had been invested in reliable generation from coal, natural gas, or nuclear fuel. With those sources operating at 90% or more of capacity, no calls for conservation would have been issued last week, electricity prices would be lower in general, and Texans would be working and resting comfortably without a regular fear of grid failure.

Of course, Texans are not the only people experiencing these problems. The reliability of the entire U.S. electric grid is under pressure as it is being forced by irresponsible politicians and bureaucrats to shift away from fossil fuels to renewables. Energy trader Brynne Kelly recently said, “Problems with power grids across the U.S. and other countries are a potential catalyst for chaos in energy markets that are underappreciated.”

Bryce explains that the push for renewables is doomed to failure for the simple reason that they are ancient technologies that have long been eclipsed by more reliable alternatives:

By using hydrocarbons (at first coal, then later oil and natural gas) humans were able to harness ever increasing quantities of power and do so in ever-denser packages. In place of animal power, sun power, and wind power, factories began using advanced waterwheels and coal-fired steam engines.

The only reason wind and solar have made a comeback in the United States is because of government mandates and the more than $140 billion in government subsidies renewables have received in recent years.

There is still hope, however, that Americans won’t have to experience the energy poverty and forced lifestyle changes of our British neighbors. The solution for avoiding this is straightforward: End the subsidies and mandates, and renewables will go the way of the horse and buggy.