For Biden, Polls Are Probably Worse Than They Seem 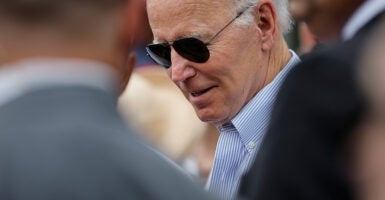 Only 13% of voters say the United States is on the right track, the lowest number since they began asking this question during the Great Recession. Pictured: President Joe Biden hosts the Congressional Picnic on the South Lawn of the White House on July 12 in Washington, D.C. (Photo: Chip Somodevilla/Getty Images)

President Joe Biden has a miserable 33% job approval rating, according to the New York Times/Siena College poll, making him one of the least popular first-term presidents in history. Sixty-four percent of Democrats say they want another candidate in the 2024 presidential race.

No modern president, as far as I can tell, has faced higher dissatisfaction in his own party during his first term. Only 13% of voters say the United States is on the right track, the lowest number since they began asking this question during the Great Recession.

Not long ago, left-wing pundits couldn’t stop talking about Donald Trump’s poll numbers—“Donald Trump is remarkably unpopular”; “The unprecedented unpopularity of Donald Trump”; “Trump is officially the most unpopular president since modern polling began in the 1930s. It will forever be his legacy,” and so on. A president with that kind of piddling support, they would argue, had no business initiating policy changes.

Nowadays, Democrats want their historically unpopular president to sign “transformative” legislation using reconciliation and unilaterally restructure American governance. The only consistent characteristic of modern liberalism is the unyielding belief that politics should be played by two sets of rules.

Still, I don’t put too much reliance on national polls. Yes, unpopularity matters. It hurts Democrats. It also further debunks the notion that the Democratic Party’s agenda items are vastly more popular, and Republicans who stand in their way are undermining “democracy.”

Republicans, though, should remember that job approval rating is measured in a bubble. The New York Times/Siena College poll finds Biden winning a matchup against Trump 44-41. The real presidential election is largely a binary choice for those who vote, and many of those dissatisfied with Biden may never vote for a Republican.

Then again, this seems to be the only takeaway for Democrats like Joe Scarborough. “So Biden’s going into halftime shooting 33% from the field and he is STILL beating Trump University,” tweets Morning Joe. All these unforeseen and unfair events have befallen the poor Biden, they argue, and yet, he still leads Trump (conveniently forgetting that he also had to deal with a once-in-a-century worldwide pandemic and ensuing economic fallout from lockdowns).

It’s certainly entertaining watching partisans feign excitement over their mollycoddled candidate holding a 44-41 lead in a national poll against a guy who is accused of sedition on virtually every news channel daily. What do these numbers look like when Trump (or someone like Florida Gov. Ron DeSantis) is reminding voters what gas prices and their 401(k)s looked like before COVID-19?

Indeed, the left is again convincing themselves that winning a national poll means something. (Siena, incidentally, had Hillary Clinton up 17 points in its final 2016 poll.) There is no popular vote. Biden must win states. And the president is underwater in almost every one of them, on almost every issue, in almost every poll. I’m no prognosticator or election expert—Biden might well win reelection—but none of that could possibly be heartening news for Democrats.

I’m just unsure how it gets any better for Biden. Democrats on social media do a lot of self-soothing, convincing themselves that events will become more hospitable for the president. Perhaps, if Biden stopped undermining the economy and energy production, they may, to some extent.

Economic indicators, however, aren’t projecting a big turnaround. Even if they did, Biden’s claim to moderation, largely a function of his age, has already been obliterated.

Two-thirds of independents don’t approve of his performance. At the same time, Biden’s progressive rhetoric is also transparently unprincipled. Neither Biden nor any president really has the power to mollify progressives—not until the Constitution is rendered inoperative.

With all that said, the prevailing concern about Biden among voters in the New York Times/Siena College poll isn’t ideological; it’s his age—by which we can deduce they mean his competence.

In the 2020 race, Biden’s fragile state was largely concealed from the public by the campaign and press. These days, on the rare occasions the president wanders into an unscripted interaction, he is incoherent. The chances of the president’s cognitive state improving, I’m afraid, are nil. That’s not how nature works.