Detransitioning Teen Pleads: ‘No Child Should Have to Experience What I Have’ 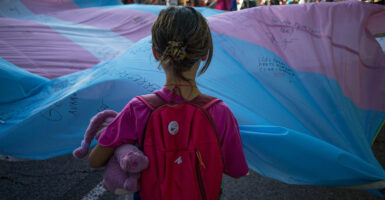 Florida is considering a proposed rule that would no longer compel taxpayers to pay for “procedures that alter primary or secondary sexual characteristics.” Pictured: A girl holds the transgender pride flag on July 9 during a pride march in Madrid. (Photo: Luis Soto/Getty Images)

Concerned parents and at least one teen who has detransitioned after having her breasts surgically removed asked state officials to do more to protect minors.

The proposed rule would no longer compel taxpayers to pay for “procedures that alter primary or secondary sexual characteristics.” Heartrending testimony came from Chloe Cole, who began transitioning from female to male at age 13. After having a double mastectomy, she changed her mind.

“I don’t know if I’ll be able to fully carry a child and I might be at increased risk for certain cancers, namely cervical cancer. And because I do not have my breasts … I am not able to breastfeed whatever future children I have,” she said, taking a long, reflective pause. “That realization actually was one of the biggest things that lead to me realizing that this was not the path that I should have taken.”

“No child should have to experience what I have,” Cole told legislators on Monday. “My consent was not informed, and I was filled with modernism.”

Cole’s story conforms with the known facts of neural development in adolescents.

“The fact of the matter is, you really can’t have informed consent as an adolescent,” Jennifer Bauwens, director of the Family Research Council’s Center for Family Studies, told “Washington Watch” guest host Joseph Backholm on Monday.

The brain, which continues to take final form and transition from emotional to logical decision-making into the early 20s, “isn’t developed enough” to make wise, weighty decisions.

“Unfortunately, gender-dysphoric children are being encouraged, through activism and peer pressure, to disassociate from their bodies and to believe that their body parts can be removed and modified or replaced,” January Littlejohn told the hearing on Monday. The Leon County School District let her child transition to another gender without her consent, she testified.

Others felt emboldened to speak the truth about complementarity in creation. “We are here to state the obvious: No child can or ever will be born in the wrong body. Everybody knows what a woman is, but some people are afraid to say it,” insisted Jeannette Cooper, a co-founder of Parents for Ethical Care. “We are not afraid.”

Some on the left stated their desire to perpetuate taxpayer-funded transgender transitions for teens.

Agriculture Commissioner Nikki Fried, who hopes to win the Democratic nomination to run against Gov. Ron DeSantis in the Aug. 23 primary, falsely stated that so-called “gender-affirming care is the standard of care.” But a new report from the state’s Agency for Health Care Administration notes that medical organizations’ statements concerning underage gender dysphoria amount to guidelines, not standards of care.

“Standards of care are rigorous, tested, and measured points of reference for medical treatment and procedures,” compiled through “decades of testing and experimentation,” Aaron DiPietro, legislative director of the Florida Family Policy Council, told “Washington Watch” on Monday. “Guidelines are simply one physician’s opinion.”

“Studies presenting the benefits to mental health, including those claiming that the services prevent suicide, are either low or very low quality and rely on unreliable methods such as surveys and retrospective analyses, both of which are cross-sectional and highly biased,” the report says. “Rather, the available evidence demonstrates that these treatments cause irreversible physical changes and side effects that can affect long-term health.”

“Fear is the primary driver of this ideology,” insisted Bauwens.

DiPietro said not only should lawmakers take account of “the conscience factor, that we should not be paying for things that clearly violate the conscience rights of many Floridians,” but “even beyond that, the scientific data” require physicians halt the march toward government-funded transgender hormones and surgeries for underage patients. “We need to be a wise steward of taxpayer funds,” including the need to deny “state monies for these very harmful procedures.”

The Agency for Health Care Administration states there is only “weak evidence supporting the use of puberty suppression” and “stronger research demonstrating the permanent” damage such procedures cause.

Those who believe children should be allowed to permanently alter their bodies before their brain has finished developing are not following the science, the report explains. In fact, some studies show “puberty-related hormones play a role in brain development as documented in animal studies and that stopping these hormones also prevents neurodevelopment in addition to sexual maturation.”

Those who continue to promote gender extremism do so for ideological reasons.

“This is a religion,” argued Bauwens. “It takes a lot of faith to believe that someone who’s standing before you, who is biologically female or biologically male, is actually something other than that.” The showdown between gender extremists and cautious parents constitutes a clash of Christian versus secular worldviews, and “ours is more based in reality.”

Some legislators believe teens should be protected from peer-pressure and emotion-laden exploitation until they can think clearly about the issue.

Sen. Tom Cotton, R-Ark., and Rep. Jim Banks, R-Ind., have introduced the Protecting Minors from Medical Malpractice Act, which allows minors who later regret gender transition to sue for damages up to 30 years after the procedure.

At a minimum, Bauwens said, legislators should stop providing Medicaid funding for the controversial, life-altering, and irreversible procedures. “We are targeting the very most vulnerable in our population, the ones who should be receiving help,” she told Backholm.

Studies show roughly 9 out of 10 children who struggle with their gender will reconcile themselves to their birth gender by adulthood.

In the meantime, Chloe simply pleads with other minors, “If you are considering transitioning, please wait until you are a fully developed adult.”

Pleading is all she can do until the law protects impressionable minors from a predatory industry.