Biden’s New Title IX Rule Guts Protections for Women and Girls. Here’s How to Fight It. 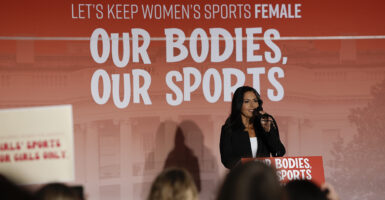 To promote the transgender agenda, the Biden administration is proposing to gut anti-discrimination protections for women and girls in educational institutions. Pictured: Former U.S. Rep. Tulsi Gabbard, D-Hawaii, speaks at an "Our Bodies, Our Sports" rally to mark the 50th anniversary of Title IX in Washington, D.C., on June 23, 2022. Rallygoers called on President Joe Biden to restrict men from competing in women's sports. (Photo: Anna Moneymaker/Getty Images)

A few days after the momentous golden anniversary of Title IX—the federal civil rights law that prevents sex discrimination in any educational institution receiving government funding—the Biden administration has proposed a new rule to radically rewrite that law by, among other things, adding provisions for individuals claiming to be transgender and gutting the protections for women and girls that were originally intended.

Title IX was a part of the Education Amendments of 1972, and its prohibition is simple:

No person in the United States shall, on the basis of sex, be excluded from participation in, be denied the benefits of, or be subjected to discrimination under any education program or activity receiving Federal financial assistance.

But this simple law has provided a platform for a proposed rule from the Department of Education that is replete with problems. These problems, if left unaddressed, promise to fundamentally overhaul the state of American education as it exists today.

The Department of Education signaled its rule change as far back as June 2021 with a Federal Notice of Interpretation of Title IX. It indicated that—based on the Supreme Court’s ruling in Bostock v. Clayton County in 2020—sex discrimination would be interpreted within Title IX to also include discrimination based on sexual orientation and gender identity.

Applying this rationale to Title IX—erroneously, as I’ve previously written—removes the law’s intended protections for women and vitiates its very purpose.

There are four chief problems with the new rule:

1. The proposed rule expands the definition of “sex” to include “gender identity.”

What does this mean for American school girls and young women? It means that any K-12 school, college, or university receiving direct or indirect federal funding would have to open its bathrooms, locker rooms, housing accommodations, and any other sex-separated educational program or offering to someone who is biologically of the opposite sex.

Such a dangerous rewriting of the rule sacrifices the safety, privacy, and equality of girls and women to appease a pet policy agenda, unsupported by necessity. It ignores the extensive congressional record on Title IX’s purpose and the law’s specific provision of separate spaces to protect the privacy and safety of girls and women—those for whom the law was passed.

In a likely recognition that the issue of biological men joining women’s and girls sports teams doesn’t poll well, the Department of Education has said it “plans to issue a separate notice of proposed rulemaking to address whether and how the Department should amend the Title IX regulations to address students’ eligibility to participate on a particular male or female athletics team.”

But the use of “whether” is illuminating. The department’s unwillingness to commit to a full-throated repudiation of biological men competing in women’s sports hints that the proposed rule perhaps already addresses the issue. Because it does.

After expanding the term “sex” to include gender identity, the proposal goes on to state:

Thus, the department has ensured that the sports issue will be decided in favor of biological men whether or not it engages in additional rule-making.

New rule-making on sports is an empty promise: The Education Department is likely to find that there is “discrimination” when faced with Title IX discrimination complaints by so-called transgender athletes. Every. Time.

2. The proposed rule will eliminate due process protections for students accused of sexual harassment or sexual assault.

After thorough consideration of over 124,000 public comments and in response to a growing crisis of sexual violence in education, the department under the previous administration issued a Title IX rule in 2020 that clarified that sexual harassment, including sexual assault, constituted unlawful sex discrimination.

Among other things, the 2020 rule requires colleges to provide live hearings and allow both the accused and complainant student’s advisers to cross-examine parties and witnesses involved. Institutions must also presume that those accused of sexual misconduct are innocent prior to the investigative and decision-making process.

But President Joe Biden’s proposed rule rolls back the 2020 protections, leaving schools with a “guilty until proven innocent” presumption for those accused of harassment or assault, virtually guaranteeing the wrongful punishment of innocent people.

Expulsion from school, loss of scholarships and financial aid, and reputational harm for the wrongfully accused can and will dramatically change the trajectory of an individual’s life and career.

3. The proposed rule will install a “heckler’s veto” at schools that are federally funded by forcing students, teachers, and professors to toe the line on a woke, sexual orthodoxy or be faced with a Title IX federal complaint.

Title IX complaints filed by hypersensitive students claiming to have felt sexually harassed by otherwise innocent speech made by professors and students were rising prior to the department’s 2020 rule.

Currently, campus speech—such as discussion of sexual issues—is not considered harassing just because it is “pervasive”; and let’s face it, debates and discussions about sex and gender tend to be fairly pervasive on college campuses.

To constitute verbal sexual harassment, the speech must not only be pervasive, it must also be severe enough in nature to deny or limit a “person’s ability to participate in or benefit from the recipient’s education program or activity.”

But the Biden administration is hoping to change that. Its new Title IX rule would discard the current definition of verbal sexual harassment used by the Education Department, which is based on a 1999 Supreme Court decision.

Instead, it would redefine sexual harassment more broadly in schools and universities to restrict speech that some courts have ruled is protected by the First Amendment. It would do that by revising its definition of sexual harassment to cover behavior that is deemed either pervasive or severe—but it wouldn’t need to be both.

In fact, as recently as this year, a student group—Speech First—challenged the Title IX harassment policy at the University of Central Florida in federal court because it imperiled the students’ ability to share their views with progressive classmates who might be offended by their speech.

As the federal appeals court noted, “Among the views that Speech First’s members have said they want to advocate,” but fear punishment for expressing, were “that the government ‘should not be able to force religious organizations to recognize marriages with which they disagree,’” and that “a man cannot become a woman because he ‘feels’ like one.”

The fact that these statements, which are protected by the First Amendment, could “qualify for prohibition” under a harassment definition shows that such a definition “is staggeringly broad,” said the court in its ruling against the University of Central Florida.

The Biden administration has clarified that it will define verbal “harassment”—which schools and colleges must punish under the proposed rule—as any “unwelcome sex-based conduct that is sufficiently severe or pervasive, that, based on the totality of the circumstances and evaluated subjectively and objectively, denies or limits a person’s ability to participate in or benefit from the recipient’s education program or activity (i.e., creates a hostile environment).”

But its use of the term “hostile environment” does nothing to limit its reach or protect free speech. Under schools’ “hostile environment” harassment codes, students and campus newspapers have been charged with racial or sexual harassment for expressing commonplace views about racial or sexual subjects, such as when they have criticized feminism, racial preferences, sexual harassment regulations, homosexuality, gay marriage, or transgender rights, or discussed the alleged racism of the criminal justice system.

Whether it’s the filing of spurious Title IX complaints to remove undesirable voices from campus or forcing de facto speech codes into classroom instruction, the mind reels at the many possible abuses of the Title IX investigation process to chill free speech on campus.

4. The proposed rule quietly removes protections for religious institutions that adhere to a traditional belief on sexuality, gender, and marriage by eliminating previous protections that were reaffirmed as recently as 2020.

These institutions saw the writing on the wall with the Obama administration’s aggressive expansion of Title IX’s application and sought assurances they wouldn’t be forced—in violation of their sincerely held religious tenets and teachings—to hire same-sex couples who live together openly, to open single-sex dorms to members of the opposite sex, or to fling wide their bathrooms for individuals whose subjective self-gender identity runs counter to their biology.

In 2019, two students married to same-sex partners sued Fuller Theological Seminary, which had expelled them for violating its sexual standards policy. Although a federal court agreed in principle that Title IX covered LGBTQ persons, it sustained the religious exemption claim and dismissed the complaint.

The long-standing religious exemption was reaffirmed in the 2020 Title IX regulation that states in pertinent part:

An educational institution that seeks assurance of the exemption set forth in paragraph (a) of this section may do so by submitting in writing to the Assistant Secretary a statement by the highest ranking official of the institution, identifying the provisions of this part that conflict with a specific tenet of the religious organization.

Yet even though Title IX’s religious exemption is firmly grounded in statutes, regulations, and judicial decisions, the recent draft Title IX regulation from the Biden administration removes the religious protections without providing any justification for the proposed change.

With its new Title IX rule, the Biden administration is pursuing a radical agenda and proposing a change to our laws and to our educational system that will do irreversible and long-lasting harm to women, girls, the wrongly accused, our faith institutions, and freedom of speech. With such a transformative proposal under consideration, it’s imperative that citizens take action to defeat it.

The sister organization of The Heritage Foundation that helps citizens keep government accountable—Heritage Action for America—has created a toolkit for the American public to use in pushing back against a rule that will affect nearly every student in America. The kit includes sample tweets, highlights of the rule, and more. Find that toolkit here.

Under federal law, the Department of Education is required to take written comments from the public into consideration when promulgating a new rule of any kind. The public comment period on its new Title IX rule closes on Sept. 12. Comments can be submitted here.