‘We Are Not Tacos’: Hispanic Journalists Reprimand Jill Biden Over Use of Mexican ‘Stereotype’ 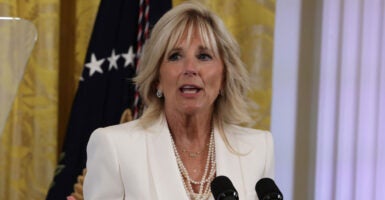 An organization of Hispanic journalists blasted first lady Jill Biden after she claimed Hispanics were as “unique” as breakfast tacos during a Monday speech in San Antonio.

“Using breakfast tacos to try to demonstrate the uniqueness of Latinos in San Antonio demonstrates a lack of cultural knowledge and sensitivity to the diversity of Latinos in the region,” the National Association of Hispanic Journalists said in a post on Twitter.

The first lady made the comments while speaking at an event honoring Raul Yzaguirre, president of UnidosUS.

“Raul helped build this organization with the understanding that the diversity of this community, as distinct as the bodegas of the Bronx, as beautiful as the blossoms of Miami, and as unique as the breakfast tacos here in San Antonio, is your strength,” Biden said.

NAHJ encourages @FLOTUS & her communications team to take time to better understand the complexities of our people & communities.

We are not tacos.

Our heritage as Latinos is shaped by various diasporas, cultures & food traditions.

Do not reduce us to stereotypes. pic.twitter.com/KQIq5gwsht

“We are not tacos,” the group said.

Republicans and conservatives pounced on the comments, which came as Hispanic voters appear to be trending Republican. Rep.-elect Mayra Flores, a Texas Republican, won a June special election in a district that is 85% Hispanic with 51% of the vote.

“Which White House speechwriter just won a bet for getting the First Lady to say something like this?” Steve Guest, an adviser to Sen. Ted Cruz, R-Texas, asked on Twitter.

Jill Biden just said Hispanics are as “unique” as tacos.

This isn’t Veep. Which White House speechwriter just won a bet for getting the First Lady to say something like this?pic.twitter.com/DXfJgYz0g5

Imagine the regime media meltdown if a conservative called Hispanics “breakfast tacos” like Dr. Jill Biden did at the Latinx Luncheon today.

A spokesman for the first lady posted an apology on Twitter.

The First Lady apologizes that her words conveyed anything but pure admiration and love for the Latino community.

“The First Lady apologizes that her words conveyed anything but pure admiration and love for the Latino community,” Michael LaRosa said.

The White House and the National Association of Hispanic Journalists did not immediately respond to requests for comment from The Daily Caller News Foundation.