General Suspended, Put Under Investigation After Responding to Jill Biden’s Tweet on Abortion 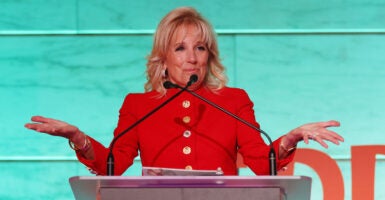 The U.S. Army suspended and is investigating Lt. Gen. Gary Volesky after he tweeted in response to first lady Jill Biden’s remarks about the Supreme Court’s decision to overturn Roe v. Wade.

Volesky tweeted, “Glad to see you finally know what a woman is,” in response to the first lady’s June 24 tweet voicing her disapproval of the court’s Roe v. Wade decision, according to USA Today. His tweet has since been deleted as the U.S. Army announced its decision to suspend and investigate Volesky on Saturday.

Volesky served the military in a mentorship role before suspension and was the former head of communications for the U.S. Army, The Washington Post reported. He received the military’s third-highest combat honor, the Silver Star, for his efforts in Baghdad during the Iraq War.

For nearly 50 years, women have had the right to make our own decisions about our bodies.

Today, that right was stolen from us.

And while we may be devastated by this injustice, we will not be silent. We will not sit back as the progress we have already won slips away.

A military expert called Volesky’s response to the first lady a “breach of decorum for a retired military officer,” according to USA Today.

Rep. Liz Cheney, R-Wyo., tweeted in 2021 she would be on the Jan. 6 committee, stating, “I’m honored to be on Jan. 6th select committee. Our oath to the Constitution must be above partisan politics,” according to USA Today.

Volesky replied on Twitter, “This is all about partisan politics.”

The U.S. Army, Volesky, and a spokesperson for the first lady did not respond to the Daily Caller News Foundation’s request for comment.