‘We Love Killing Babies’: What I Saw at Women’s March Protest 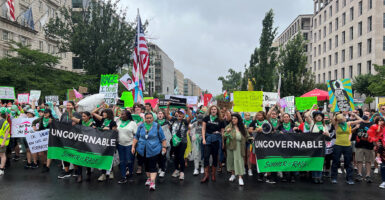 Protests continue post-Roe in an attempt to get abortion codified at the federal level. Pictured: A group of protesters march to the White House in Washington D.C. on July 9, 2022. (Photo: The Daily Signal)

Protests around the nation continue in the aftermath of the Supreme Court’s decision to overturn Roe v. Wade and return the issue of abortion to the American people.

On Saturday, feminist organization Women’s March marched their way from a park to the fence in front of the White House, buffeted by rain all the while.

The protesters began by gathering at Franklin Square 10 minutes away from the White House. They listened to a series of speeches by protest leaders before eventually leaving the park.

The protesters made their way through the streets of Washington D.C., chanting and yelling all the while. A pro-life Christian group followed them on the sides of the road. As the pro-abortion group turned to head towards the White House, one of the protesters blocked a pro-life sign and screamed “We love killing babies!”

Eventually, the march reached the White House. Pro-abortion protesters slowly made their way through Lafayette Square to the fence outside the north entrance to the White House. Once at the fence, they began to tie bandanas and themselves to fence while police and Secret Service agents watched on.

After a little less than an hour, the crowd began to clear. Some continued to march their way downtown, others left. At the end of the day, it seemed like nobody had been arrested.