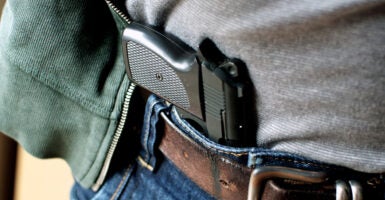 A data leak at the California Department of Justice made public the personal information of perhaps hundreds of thousands of gun owners. (Photo Illustration: koi88/Getty Images)

Tim Sylvester, a self-described gun collector in California’s Central Valley, is incensed by last week’s admission by California’s Department of Justice that it made public the personal information of perhaps hundreds of thousands of gun owners, likely including his own.

“It’s a breach of trust,” Sylvester, an almond and grape farmer who taught firearm safety classes for several years, told RealClearPolitics. “You put the information out there, and somebody will misuse it. It’s wrong.”

Last week, Rob Bonta, the Democratic attorney general who heads the state Justice Department, acknowledged that the data breach contained a virtual treasure trove of personal data on people who were granted or denied permits to carry concealed weapons between 2011 and 2021.

Bonta, who is running for reelection in November, said he is “deeply disturbed and angered” by the state government’s failure to protect citizens’ privacy following state laws to apply for firearms.

California is one of the strictest states regarding the carrying of firearms. It allows residents to acquire permits to carry concealed weapons, but only if they are 18, submit to thorough background checks, and receive firearms training.

“This unauthorized release of personal information is unacceptable and falls short of my expectations for this department,” Bonta said last week while providing little explanation for how and why the breach occurred, noting only that it took place following an update to the state’s Firearm Portal on Monday. Instead, he announced an internal investigation and offered those whose information had been exposed private credit-monitoring services to protect their data from online thieves.

That’s not good enough for gun rights organizations in California and the nation. The California Rifle and Pistol Association called the data leak “a privacy breach of stunning proportions” and questioned the timing of the release of the information.

The information leak occurred just days after the U.S. Supreme Court threw out New York’s requirement that those seeking to carry concealed weapons provide a reason. The decision nullified California’s similar requirement and prompted Bonta and state lawmakers to craft regulations that could pass the high court’s new higher bar.

California Gov. Gavin Newsom has called the high court’s concealed-carry decision “reckless” and “radical” while pledging to work with the Legislature to find a way to strengthen the state’s public carry law to comply with the ruling.

The same week the data breach occurred, Newsom approved two of 16 pending new gun-related bills. The two he signed into law would prevent the marketing of guns to minors and further restrict banned ghost guns, which are intentionally made untraceable, as well as the parts used to build them.

Another bill expected to head to his desk soon would allow private citizens to sue gun-makers, distributors, and traders who sell banned firearms. Newsom publicly lauded the legislation as well as the way lawmakers crafted it. It’s based on a Texas law allowing people to sue abortion providers, upheld by the Supreme Court earlier this year.

“There is no principled way the U.S. Supreme Court can’t uphold this law,” Newsom said in February. “It is quite literally modeled after the law they just upheld in Texas.”

The Concealed Coalition, which provides training nationwide for those seeking permits to carry concealed firearms, questioned the timing of the data breach and called for an independent investigation by an entity unconnected to the California state government and its lawmakers and officials.

“We hope the release of personal data was simply an innocent error. Nevertheless, given the seriousness of the matter, it is essential that a thorough investigation take place,” the coalition said in a statement. “It is disturbing that gun owners who complied with the law in the state now find themselves at risk because of negligence [by] the state’s Department of Justice.”

Chris Picou, the coalition’s CEO, said he’s particularly concerned for applicants whose permits weren’t approved, and for victims of rape and sexual harassment seeking to carry firearms to feel safer. He also worries that criminals now can target gun owners’ homes to steal the weapons, or that those with concealed carry permits could be subject to workplace discrimination by anti-gun co-workers or employers.

“Now their information is exposed,” he told RealClearPolitics. “This is something that you can’t take back.”

Firearm sales soared during the COVID-19 pandemic and in response to the 2020 violent riots and civil unrest in cities across the country in the wake of the murder of George Floyd by a Minneapolis police officer.

Many of these new applicants for gun permits and concealed carry training are women and minorities living in some of the biggest cities in the country, such as Chicago and Detroit, Picou says.

“We’re seeing an incredible increase in female students in our classes, as well as African American and Hispanic students,” he said.

In California, the data breach is becoming a hot-button political issue, especially in the state’s agricultural Central Valley, where pick-up trucks with gun racks outnumber the ubiquitous Teslas and Priuses that dot the state’s urban areas. The Central Valley also is ground zero for the midterm congressional races, with three of the state’s eight most competitive races playing out there.

First elected to Congress in 2012, Valadao tends to outperform the Democratic tilt of his district, although he lost his seat in the 2018 blue wave before winning it back in 2020. Valadao is facing challenger Rudy Salas, a business-friendly state legislator, and the lone Democrat to vote against the gas tax increase in 2017.

“We need to hold agencies like the DOJ to a higher standard for privacy if they are handling people’s personal data, and my team is actively looking into legislative options to address this issue,” he said.

The Salas campaign did not respond to a request for comment.

At the statewide level, Nathan Hochman, Bonta’s GOP challenger for attorney general, said the leak has irreparably broken public trust in his ability to handle sensitive and private data, and he urged voters to punish him at the ballot box in November.

“His feeble solution to provide ‘credit-monitoring services’ to those affected is like trying to put a Band-Aid on a potentially life-threatening wound,” said Hochman, a former assistant U.S. attorney for the Central District of California. “If he were president of a public company, such a grave error would result in the board firing him immediately. As attorney general, the public will have that chance when it votes him out of office in November.”