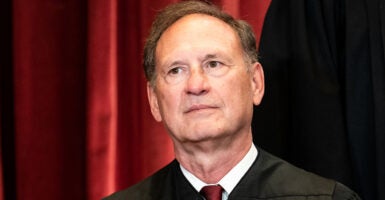 In May we saw the lightning flash, a leaked draft opinion showing that a majority of the Supreme Court stood ready to overrule Roe v. Wade and its offspring, Planned Parenthood v. Casey.

Then on June 24, we heard the thunder roll from the Supreme Court: “Roe and Casey must be overruled.” And with them dies the nearly 50-year-old fiction of a constitutional right to abortion.

Roe’s demise was not swift, but the ruling in Dobbs v. Jackson Women’s Health Organization spares the high court and the public what many had anticipated: incrementalism ad infinitum led by Chief Justice John Roberts, with the court approaching Roe asymptotically, always drawing nearer to overruling it without ever crossing that line. Roberts’ lonely Dobbs concurrence indicates that this is precisely what he intended.

In disposing of Roe’s radicalism and Roberts’ incrementalism, Justice Samuel Alito’s majority opinion also signals the twilight of the court’s role as fashioner of bespoke constitutional rights tailored to the mores of America’s managerial class.

We can anticipate this waning from Alito’s approach to substantive due process, a legal doctrine under which courts determine what actions, practices, etc., constitute “liberty” protected from government interference by the 14th Amendment.

In the hands of liberal and progressive justices, substantive due process was used to create a new suite of individual rights inspired by vogue, maximalist conceptions of autonomy and privacy.

In the 1960s and ’70s, civil libertarians, mistrustful of moral regulation, and progressives, disdainful of tradition, seized new ground in a series of Supreme Court decisions announcing rights to marital privacy and contraception before the trend culminated in the discovery of a right to abortion in Roe.

By some lights this era was the high-water mark of the court’s individual rights jurisprudence, at least in the sheer number of previously unknown rights found hiding in the Constitution’s 18th-century text.

But Alito’s approach to substantive due process in Dobbs represents the revival of old judicial wisdom found in a not-so-old opinion, then-Chief Justice William Rehnquist’s 1997 decision in Washington v. Glucksberg.

As the court’s individual rights jurisprudence slid toward autonomy-driven anarchy, Glucksberg presented a question not unlike that in Roe: Does liberty include the right to take human life, specifically by physician-assisted suicide? For Rehnquist and a unanimous court, the answer was a resounding “no.”

And why? Because the court did not busy itself trying vainly to unravel the “concept of existence” and speculating on the resulting implications for government; instead, the court focused on what it had some hope of discerning: whether the asserted right was “objectively deeply rooted in this Nation’s history and tradition.”

This at least would keep courts from creating inviolable rights out of whole cloth. Yet some historic antecedent would not be enough. Rather, to merit the label “liberty” and the resulting protection, Rehnquist explained that the supposed right had to be “implicit in the concept of ordered liberty, such that neither liberty nor justice would exist if they were sacrificed.” (Emphasis added.)

A right to a physician-assisted suicide, which had no historical antecedents, stood no chance of gaining constitutional sanction under Rehnquist’s approach. A similar weakness haunted the right to abortion.

Although the Supreme Court had affirmed Roe’s “essential holding” just five years earlier in Casey, the late Justice Antonin Scalia foresaw the implications of Glucksberg. Neither Roe nor Casey “even attempt[ed] to establish that the freedom to abort was rooted in this Nation’s tradition.”

Thus, both decisions—and the right they maintained—had been “eroded” by Glucksberg.

This foresight seemed more wishful than prescient when written. Scalia made this observation while dissenting in the infamous sodomy case, Lawrence v. Texas, where the court resumed its practice of elevating previously disfavored acts to the hallowed status of constitutional liberty.

This line reached its own well-known culmination 12 years later in Obergefell v. Hodges, where Justice Anthony Kennedy denied that Glucksberg had any relevance at all to “fundamental rights, including marriage and intimacy.”

Kennedy’s approach was question-begging. Surely, the individual interests implicated by assisted suicide were every bit as profound and intimate as those raised by contraceptives and non-procreative unions. But if Kennedy could not wrestle with Glucksberg, he would confine the decision to its facts and ensure it presented no hurdle to the task at hand nor to the discovery of additional privacy/intimacy/autonomy rights in the future.

Kennedy’s dismissal of Glucksberg in Obergefell was not lost on the Dobbs dissenters, who contended that the high court had “rejected” the need to define asserted liberty rights in a “circumscribed manner,” raising the question of how they would see such rights defined (generally? vaguely? vacuously?).

But in Dobbs, Glucksberg regained life just as Roe and Casey lost it. Four justices now agree that Glucksberg’s reasoning is the method by which any unenumerated rights are to be discerned in the 14th Amendment. A fifth, Justice Clarence Thomas, gave his qualified support, though he’d like to see the doctrine of substantive due process abandoned altogether.

As Alito made amends for the Supreme Court’s past mistakes, he acknowledged that the court in Roe “could have said of abortion exactly what Glucksberg said of assisted suicide: ‘Attitudes toward [abortion] have changed since Bracton, but our laws have consistently condemned, and continue to prohibit, [that practice].’”

In short, history afforded the Supreme Court no basis in 1973 to conclude in Roe that a right to abortion was a component of our nation’s ordered liberty. Instead, in Roe the court used its privacy precedents as scaffolding to continue the project of constructing its own alternate Constitution alongside the original.

So, what response do the three Dobbs dissenters offer to the majority’s call for ordered liberty? Their answer is less that Roe was right than that abortion is necessary to our current social and economic arrangements. They lash out at the majority for allowing “the proclivities of individuals [to] rule,” instead of the law.

In fact, the dominance of proclivities over law is the defining feature of the rights regime that Roe typified. The privacy rights cases hinged not on the Constitution’s text, nor on our nation’s history, but on certain justices’ deeply felt need to instantiate “equal rights of citizens to decide on the shape of their lives,” and realize, as Kennedy stated in Obergefell, “the right to define one’s own concept of existence, of meaning, of the universe, and of the mystery of human life.”

This deeply modern, deeply subjective individualism is the spirit that animates the Dobbs dissenters’ view of liberty. It is not without allure.

But it is not plausible that the Constitution now or ever protected this breathtakingly broad right to self-definition. Alito answered the dissenters:

While individuals are certainly free to think and to say what they wish about ‘existence,’ ‘meaning,’ the ‘universe,’ and ‘the mystery of human life,’ they are not always free to act in accordance with those thoughts. License to act on the basis of such beliefs may correspond to one of the many understandings of ‘liberty,’ but it is certainly not ‘ordered liberty.’

You can debate the wisdom of substantive due process. Thomas certainly will. But the Glucksberg revival in Dobbs sets an example for more than just the lower courts.

Our society must strive for ordered liberty if we mean to foster cohesion and longevity in our republic. A nation of individuals armed against nature and each other with an expanding arsenal of rights to self-definition is engaged in a project of disintegration.