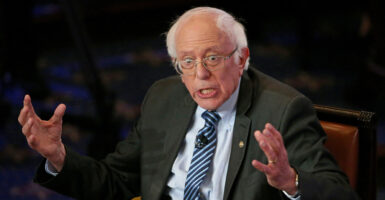 Millions of American families are reeling from the worst wave of inflation in more than four decades. Reduced purchasing power and shortages of basic goods, such as baby formula, have caused consumer confidence to hit record lows.

Those looking to Washington for real solutions will be left wanting. Both the Biden administration and congressional Democrats are promoting tired, failed policies: more federal micromanagement, red tape, handouts to political allies, and threats of job-killing tax hikes.

When it comes to inflation, the direction elected officials take regarding federal spending is vitally important. Overspending has been a major factor behind inflation, as Capitol Hill and the Federal Reserve have dumped trillions upon trillions of dollars into the economy and sparked the inflationary fire. Yet, astonishingly enough, there are plans to add even more monetary gasoline.

The chart below demonstrates the staggering size of this irresponsibility.

From March 2020 through June 2022, the federal government added $7 trillion in debt.

To put that in perspective, the federal debt reached a total of $7 trillion in 2004, covering a span from George Washington to the first term of George W. Bush.

That means the federal government has racked up 215 years’ worth of debt in just 27 months.

While some amount of deficit spending might have been hard to avoid during the worst of the COVID-19 pandemic, Washington kept breaking out the credit card to continue an unnecessary and wasteful spending spree, oversaturating the economy and making inflation problems inevitable.

While the absolute amount of debt is important, a more important figure over the long term is the amount of debt relative to the size of the economy. As the chart above shows, that measure is also going in the wrong direction.

The federal government only reached this amount of debt once—following a combination of the longest economic downturn and the greatest military struggle in history.

Though the nation has faced challenges in recent years, none reach the magnitude of World War II or the Great Depression, meaning there’s no excuse for adding so much debt so quickly.

The Biden administration, ignoring this history, is planning just the opposite; namely, more spending, more debt, and more concentrated power for the Washington swamp.

The size of annual deficits and the total accumulated debt is already astronomical. Unfortunately, those massive amounts pale in comparison to unfunded liabilities facing Social Security and Medicare. Spending on both programs has been growing faster than the economy for decades, and is expected to continue to grow indefinitely, making them unsustainable.

There are no easy solutions to addressing these programs. However, one fact is beyond dispute: The longer Congress waits to implement reforms, the harder the choices will become.

Congress has made it easier for members to ignore the mounting problem of unfunded benefit programs by making them “mandatory,” meaning the spending occurs year after year, regardless of whether legislators pass bills or even bother with budgets. As the chart above shows, mandatory spending is now dominant.

The amount of federal spending that occurs automatically has steadily increased over the past century and is expected to keep growing in the future. Yet this is exactly the spending that’s growing fastest; meaning, it should receive more attention, not less.

Despite this stark reality, some members of Congress think we need to move even further in this direction. For example, two House Democrats have introduced the People Over Pentagon Act to reduce spending on national defense by $100 billion.

The charts above and below refute the premise behind such messaging. Not only is national defense no longer the dominant aspect of federal spending, but it’s also quickly becoming an afterthought. The idea that Washington is doing too little to redistribute wealth flies in the face of reality.

Viewed in terms of dollars, the rapid growth of nondefense spending becomes even clearer. Congress has added hundreds of programs to the federal ledger over the past century, most of which receive spending increases every year.

Yet the left’s appetite for taxpayer-funded resources shows no sign of being sated. Activists want “Medicare for All,” a Green New Deal, massive forgiveness of college loans, and monthly checks, even though we can’t afford the bloated federal government we have today.

While the likes of socialist independent Sen. Bernie Sanders of Vermont claim that all of this would be possible if Uncle Sam shook down the wealthy, the math simply doesn’t add up. The only way to pay for a substantially larger government would be through substantially higher taxes on the middle class, which is commonplace across Europe.

The largest federal spending category is health care. The resources devoted to Medicare, Medicaid, Obamacare subsidies, and more are a driving force behind long-term budget imbalances and are part of the reason why medical costs had above-average inflation before the current crisis.

Congress can prevent health care spending growth from bankrupting the country by reforming Medicare in a way that promotes more choices and lower costs for beneficiaries.

From today’s inflation to tomorrow’s mounting deficits, America faces stiff headwinds. Yet, there’s still time to address these challenges and remain the greatest nation in the world if our citizens and leaders are willing to recognize the problems and make tough decisions.

Not starting next year, or when one side has a firm governing majority. Starting now.