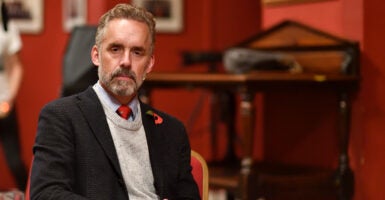 Editor’s note: This commentary, originally published March 23, has been modified to reflect Twitter’s suspensions of psychologist Jordan Peterson and commentator Dave Rubin for their tweets, and to update certain details.

Twitter is all too happy to support the mob in its quest for domination. Here is a list of 13 individuals and outlets censored by Twitter for questioning gender ideology.

On June 22, Jordan Peterson tweeted: “Remember when pride was a sin? And Ellen Page just had her breasts removed by a criminal physician.”

Page, an actor, was born a female but obtained a double mastectomy, changed her name from Ellen to Elliot and began identifying as a man.

In response, Peterson posted a video on YouTube saying that he “would rather die” than delete his tweet.

“Twitter’s a rat hole, in the final analysis. And I have probably contributed to that while trying to use, understand, and master that horrible, toxic platform,” Peterson said in a video posted on YouTube. “No doubt, I owe some apologies for that and I’m trying to learn, but it’s a relief in some real sense to be banned. And I regarded it under the present conditions as a badge of honor.”

In a message to Ben Shapiro, another conservative commentator, Rubin wrote: “I have been suspended by Twitter for posting a screenshot of Jordan Peterson’s tweet which got he himself suspended.”

Rubin added of Twitter: “While it is unclear how I broke their terms of service, it is clear that they are breaking their fiduciary responsibility to their shareholders by letting a bunch of Woke activists run the company.”

Seth Dillon, CEO of The Babylon Bee, tweeted March 20 that Twitter had locked the satirical website’s account over a story with this headline: “The Babylon Bee’s Man of the Year Is Rachel Levine.”

The outlet decided to appeal but hasn’t posted anything since March, meaning it’s likely it is still unable to access its account.

Texas Attorney General Ken Paxton responded to an article in USA Today lauding Levine as one of its “Women of the Year” by simply tweeting March 17: “Rachel Levine is a man.”

Paxton fired back the next day by releasing an official statement on his Twitter account, claiming that Twitter was censoring him and other conservative voices for stating “an irrefutable scientific fact.” Twitter slapped the same warning label on that tweet and also prevented users from interacting with it.

Murphy previously received temporary suspensions in 2018 for tweeting remarks such as “Men aren’t women” and “How are transwomen not men?”