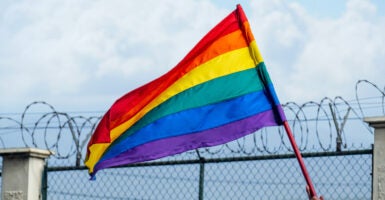 “This information does not exist," the Pennsylvania Department of Corrections replies when The Daily Signal asks how many male inmates who self-identify as women have at least one conviction for either sexual abuse or sexual assault. (Photo illustration: Getty Images)

Almost 200 biological males behind bars in Pennsylvania’s state prisons say they identify as women. A small number of them are seeking a transfer to a women’s prison.

But the Pennsylvania Department of Corrections says it doesn’t have information on how many of these biological males who identify as women were convicted of sex crimes.

In November, an inmate born as a male who says he identifies as a transgender woman sued the Dauphin County Prison in Harrisburg, Pennsylvania.

In the suit, the inmate claims he asked officials not to be housed with men, and that he had been groped by other inmates and assaulted by guards.

The American Civil Liberties Union of Pennsylvania announced a $300,000 settlement June 2 between the Allegheny County Jail and a self-identified transgender woman housed with male inmates over an alleged sexual assault in the jail.

This case isn’t associated with Pennsylvania state prisons, but Allegheny County is the second most populous county in Pennsylvania. The jail is located in downtown Pittsburgh.

In California, a women’s group sued the state in November, alleging that a biological male raped a female inmate after being  tranferred to a women’s prison because he said he identifies as a transgender woman.

In New Jersey, two female inmates became pregnant after having consensual sex with a self-identified transgender woman at the state’s only women’s prison, corrections officials announced in April.

Only 10 of the 193 biological males who say they identify as women requested a transfer to a women’s facility, the Pennsylvania Department of Corrections said in response to a public records request from The Heritage Foundation’s Oversight Project. (The Daily Signal is Heritage’s multimedia news organization.)

Five of the 10 who requested a transfer had been convicted of sexual abuse or sex offenses, according to the data provided so far by the corrections department. None of those convicted of a sex offense was transferred, the agency said in its response to The Daily Signal’s public information request.

However, in response to the question of how many male inmates who self-identify as women have at least one conviction for either sexual abuse or sexual assault, the Department of Corrections said: “This information does not exist.”

Maria A. Bivens, press secretary for the Pennsylvania Department of Corrections, told The Daily Signal in an email:

The DOC has access to criminal history, medical, disciplinary, and other information of all incarcerated people in the department’s custody and care; however, the format for tracking transgender individuals does not include information relative to their criminal histories. As a result, no responsive records exist relative to the original RTKL [Right to Know Law] request.

A provision of that law states:

In deciding whether to assign a transgender or intersex inmate to a facility for male or female inmates, and in making other housing and programming assignments, the agency shall consider on a case-by-case basis whether a placement would ensure the inmate’s health and safety, and whether the placement would present management or security problems.

Another provision of the federal law states: “A transgender or intersex inmate’s own views with respect to his or her own safety shall be given serious consideration.”

California goes beyond the federal law. In 2021, the state’s Legislature passed legislation–called the Transgender Respect, Agency and Dignity Act–designed to make state prisons more accommodating to inmates who say they identify as transgender.