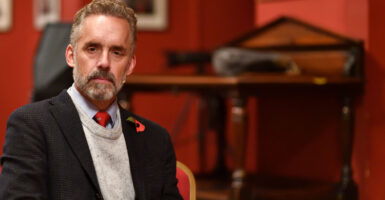 Jordan Peterson, pictured at Cambridge Union on Nov. 2, 2018 in Cambridge, Cambridgeshire, was suspended from Twitter for tweeting, "Remember when pride was a sin? And Ellen Page just had her breasts removed by a criminal physician.” (Photo: Chris Williamson/Getty Images)

The tweet that got Peterson suspended read “Remember when pride was a sin? And Ellen Page just had her breasts removed by a criminal physician.”

Peterson’s daughter, Mikhaila, announced the suspension on her own Twitter, tagging Elon Musk and adding that the site is “Definitely not a free speech platform at the moment.”

Peterson used Page’s birth name and the “her” pronoun, but the Canadian actor now goes by Elliot and identifies as a man.

Twitter informed Peterson that his comments violated their rule against hateful conduct, which bars users from “promoting violence” against other people for, among other things, “gender identity.”

Peterson rose to international prominence in part because he opposed Canadian Government Bill C-16 on free speech grounds, which he argued would open up the floodgates for prosecuting people who refuse to use a transgender person’s preferred pronouns.

Peterson “quit Twitter” in May after what he called an ‘endless flood of vicious insults’ that he has not received anywhere else, but ostensibly had returned to the site since then.

Max Keating is a reporter for Daily Caller News Foundation.