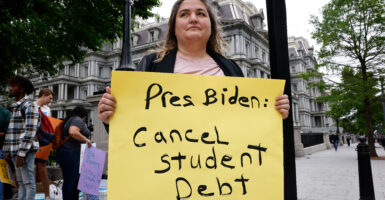 The Congressional Budget Office estimates the cost to taxpayers of the "pause" on student loan repayments from February 2021 to August 2022 will be about $85 billion. But student loan borrowers gather May 12 near the White House to urge President Joe Biden to go further and cancel student debt outright. (Photo: Paul Morigi/Getty Images)

A letter from the Congressional Budget Office in response to an inquiry by a Republican congressman from Missouri confirms that the Biden administration’s executive actions will increase cost to federal taxpayers and fuel rising deficits.

The response to Rep. Jason Smith from the CBO highlights three major actions taken by the Biden administration—on food stamps, the Affordable Care Act subsidies, and student loans—and quantifies the cost associated with those actions.

In all three cases, the Biden administration has taken questionable administrative actions to advance its big government agenda and a real cost to taxpayers.

The CBO letter revealed that the Biden action on food stamps will increase the deficit by between $250 billion to $300 billion over 10 years.

The Biden administration increased food stamp benefits through an update to the Thrifty Food Plan, in which the Department of Agriculture analyzes a basket of foods intended to provide a nutritious diet. In its Thrifty Food Plan update, the USDA increased benefits by 23%, previously thought to add more than $20 billion per year to the deficit. Now we know that the annual cost will equal $25 billion to $30 billion a year.

The Biden administration may have skirted regulations and congressional authority to increase the overall cost of the program. Senate and House Republicans have requested that the Government Accountability Office investigate the legal authorities and process that the USDA undertook to arrive at such an unprecedented increase.

The CBO reviewed the impact of the Biden administration’s proposed rule to change the parameters for determining eligibility for subsidies under Obamacare. The so-called family glitch rule would increase the deficit by $34 billion between 2023 and 2032, the CBO said.

The Biden administration is attempting to use its proposed rule to expand the number of individuals receiving Obamacare subsidies by easing the current requirements for those with employer-based coverage to qualify for the subsidies.

Under current law, individuals with access to employer-based coverage are not eligible for Obamacare subsidies. The exception to that limitation is if the employee’s share of the premium costs exceeds 9.5%.

The Biden administration’s proposed rule—which it should be noted was initiated after Congress failed to enact a similar change legislatively in the various Build Back Better proposals—attempts to expand that exception to include dependents, despite the legislative language referencing self-only coverage, rather than family coverage, in forming the calculation.

There are a number of reasons why the proposed rule is both unwise policy and legally questionable. Not only does it attempt to rewrite the law through administrative action, but it would also displace private, employer-based coverage for families in favor of government coverage and force taxpayers to foot the growing bill.

Rather than papering over the root causes that are driving up premiums and health care costs, Congress and the administration should be looking for ways to make coverage more affordable.

No other segment of society is getting the type of special treatment college graduates have received. More than two years after COVID-19 first hit, student-loan borrowers are still enjoying a “pause” on having to make repayments, at a significant expense to taxpayers.

Thanks to the new CBO report, we now know exactly how much that largesse is costing. As the CBO explains, the cost of the pause from just February 2021 to August 2022 will be about $85 billion. This “pause” on repayments is far from free.

There’s no reason to continue providing this generous taxpayer subsidy to student-loan borrowers. Statistically speaking, college graduates were more likely to be in jobs that enabled them to repay their loans and to work from home during the pandemic.

The pause asked those without degrees—Americans more likely to work in front-line service industries, such as restaurants and grocery stores—to subsidize this pause for college graduates who may have had more job security and the ability to work remotely.

As the Foundation for Research on Equal Opportunity’s Preston Cooper points out, 210 million adult Americans do not have federal student loan debt, compared with the 45 million who do.

Repayment “pauses,” and especially the more generous loan-forgiveness schemes the Biden administration is cooking up, reflect regressive policy approaches that punish those individuals who avoided debt—those who worked their way through college, went to community college for two years before attending a four-year college to reduce costs, lived at home, or didn’t go to college at all.

From food stamps to health care subsidies to higher education, the Biden administration is doubling down on policies that would increase deficits while failing to meeting the needs of children and families. The CBO’s most recent estimates show us just how costly those failed approaches will be.