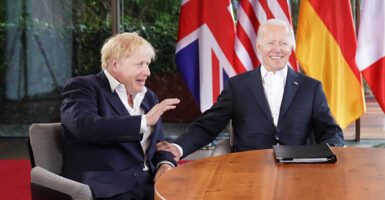 Joe Biden will attempt to counter China’s influence by spending $200 billion on "priorities" like gender equality, equity, and climate change projects in developing nations. Pictured: British Prime Minister Boris Johnson and President Joe Biden at the G-7 Summit near Garmisch-Partenkirchen, Germany, on June 28, 2022. Leaders of the G-7 group of nations came together under the motto, "Progress towards an equitable world." (Photo: Stefan Rousseau, Pool/Getty Images)

Austin Hardman is a member of the Young Leaders Program at The Heritage Foundation.

This year’s Group of Seven Leaders’ Summit in Germany was the most critical since the group’s establishment in 1973 in light of Russia’s ongoing invasion of Ukraine, an underperforming global economy, and many other interwoven global challenges. Yet the outcome of the summit turned out to be second-rate.

The most notable, but expensive and potentially wasteful, product of the G-7 gathering is a new $600 billion infrastructure financing program, the Partnership for Global Infrastructure and Investment.

The White House released a memorandum June 26 comparing the program to the Biden administration’s own “once-in-a-generation investment in domestic infrastructure” here in the U.S.

President Joe Biden highlighted his commitment to the global infrastructure program by volunteering America to pay for a third of the $600 billion.

While capitalizing on opportunities to further deepen practical trade and investment relations in many strategically critical regions of the world is indeed in the mutual interests of the United States, the other G-7 nations, and the many developing countries they would work with, the Partnership for Global Infrastructure and Investment is deeply flawed.

Rather than targeting policy areas highly correlated with improved economic freedom and prosperity, the global infrastructure initiative intends to fund projects in areas such as gender equality, “equity,” and climate change, among other left-leaning fronts.

The program has been billed particularly as the G-7’s plan to offer an alternative to Communist China’s 9-year-old Belt and Road Initiative. However, the potential for the Partnership for Global Infrastructure and Investment to pursue fruitless investments with its left-wing agenda overshadows its potential for creating a potent geopolitical advantage for the West and a more developed world overall.

The G-7’s answer to China’s multitrillion Belt and Road Initiative could prove to be ineffective if competing priorities are not properly ordered. Prioritizing such areas as gender equity and climate indicate a fundamental misunderstanding of both the predatory intent of our competitors like Russia and China and how economic development is accomplished.

Russia’s and China’s strategic goals are near identical. They both want Western nations weak and divided. Western investments aimed at countering China’s infrastructure development and technology inroads in developing nations would address China’s attempts to supplant the U.S. and the current rules-based order around the world. But using U.S. foreign aid to instead export American domestic political priorities like gender and environmental issues is completely disconnected from what needs to be done to address the China threat.

Biden tried to assure world leaders during the G-7 Leaders’ Summit that the global infrastructure program will “deliver returns for everyone.” Indeed, investment strategy should be results-oriented. But using America’s economic power for the Biden administration’s politically driven agenda contradicts Biden’s assurance that foreign investment would not serve as charity. Social justice initiatives are not proven to make a return on investment.

Where the U.S.’ $200 billion is coming from and how it will be spent should be based on how it will contribute to economic freedom in the nations it supports. This means working with host governments to make their business environments more welcoming for foreign investment by adopting pro-growth policies focused on regulatory efficiency, market openness, and other key aspects of economic freedom.

The proposed initiative would be better off by ensuring that the U.S. and its G-7 partners pragmatically enhance concrete business, energy, and geopolitical ties to critical parts of the world (such as the Three Seas region in Central and Eastern Europe), rather than focus on things such as equity, gender, and climate change policies.

Additionally, the private sector is a proven catalyst for real and meaningful economic transformation and should therefore be looked to more than bureaucratic central planning apparatuses.

Fundamentally, a nation’s capacity to grow and prosper hinges on the quality of its institutions and economic system. Being blind to this reality will result in the federal government losing $200 billion of taxpayers’ dollars in predictably poor investments. Americans already cannot afford the bloated federal government we have. The American people certainly cannot afford further negligent spending.

Practical global economic engagement is in America’s interest. Greater mobilization of the private sector to that end makes sense. Patchy, ill-considered, and profligate policies do not.