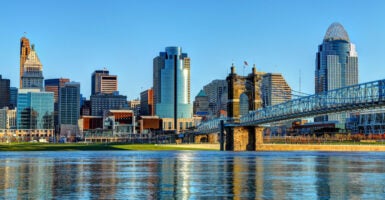 Cincinnati will reimburse government employees who travel to other states for abortions, the city’s Democratic mayor, Aftab Pureval, announced Monday.

On Friday, the U.S. Supreme Court voted 6-3 to overturn the landmark abortion case Roe v. Wade, which returns power to the states to make decisions on whether the practice will be legal.

“Our Supreme Court, Congress, and state Legislature have failed us. Local officials must do whatever we can to protect the women of our communities. It is not my job to make it easier for the state Legislature and governor to drag women back to the ’50s and strip their rights, it’s my job to make that harder,” said Pureval. “And with today’s announcements, we are fighting back.”

Cincinnati lawmakers unveiled legislation Monday that would roll back an ordinance authorized in 2001 blocking elective abortions in the government’s health care plan, WCPO 9 reported. The repeal will be voted on Wednesday by the City Council.

However, Ohio Attorney General Dave Yost, a Republican, filed paperwork to ban abortion at six weeks and it was granted within an hour of the Supreme Court’s decision, Axios reported. The law does not permit exceptions in the case of incest or rape.

The Heartbeat Bill is now the law. pic.twitter.com/ipO9fMQ4H0

“Today’s Supreme Court decision does not outlaw abortion, but returns it to the elected political branches of government,” Yost said Friday. “It never belonged in the courts.”

Blue and red states have continued to react to the decision that overturned Roe v. Wade. Dozens of prosecutors from across the country signed a letter Friday saying they will not press charges against those who receive or issue an abortion, Politico reported.

“As elected prosecutors, we have a responsibility to ensure that these limited resources are focused on efforts to prevent and address serious crimes, rather than enforcing abortion bans that divide our community, create untenable choices for patients and healthcare providers, and erode trust in the justice system,” the letter stated. “Enforcing abortion bans would mean taking time, effort, and resources away from the prosecution of the most serious crimes—conduct that truly impacts public safety.”

Pureval’s policy comes after the retail company Kroger, which has 2,750 stores statewide and is one of Ohio’s largest employers, said it would hand up to $4,000 to staff if they travel out of state for an abortion. It is unclear how Pureval’s legislation legally bodes with Yost’s abortion ban.

Neither the attorney general nor the mayor immediately responded to The Daily Caller News Foundation’s request for comment.