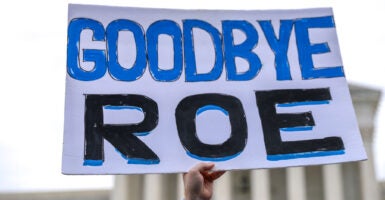 Pro-life activists like this one—seen here at a rally outside the Supreme Court on June 21—got their wish three days later when the court overruled Roe v. Wade. (Photo: Yasin Ozturk/Anadolu Agency/Getty Images)

There were times over the past 50 years when some pro-lifers felt they would never see Roe v. Wade overturned and the right to life again recognized by government.

Many who never doubted didn’t live to see this day. They had marched in the cold streets of Washington, D.C., in January on Roe’s anniversary. These never-doubters included Nellie Gray, founder of the March for Life; Phyllis Schlafly, the ardent anti-ERA and pro-life advocate; Dr. Mildred Jefferson, the first black woman to graduate from Harvard Medical School who also drew attention to the disproportionate number of aborted black babies; and Supreme Court Justice Antonin Scalia, who consistently argued that Roe was wrongly decided.

Neither did many opponents of slavery live to see the day the Emancipation Proclamation was issued, nor did many who followed and advocated for civil rights live to witness court decisions and legislation that recognized the inherent worth and equality of African Americans.

Key to resolving those issues was the acknowledgement that government does not grant rights. Government is supposed to “secure rights,” as Thomas Jefferson wrote in the Declaration of Independence—rights that are “endowed by their Creator” and thus “unalienable,” meaning “not transferable to another or not capable of being taken away or denied.”

In 1973, the Supreme Court removed the right of unborn babies to live. The 2022 Supreme Court corrected that constitutional mistake.

The Constitution and what it says and does not say was at the heart of Justice Samuel Alito’s opinion for the 6-3 majority.

Here are some key sentences from that opinion:

Not only was there no support for such a constitutional right until shortly before Roe, but abortion had long been a crime in every single State.

At common law, abortion was criminal in at least some stages of pregnancy and was regarded as unlawful and could have very serious consequences at all stages. American law followed the common law until a wave of statutory restrictions in the 1800s expanded criminal liability for abortions.

By the time of the adoption of the Fourteenth Amendment, three-quarters of the States had made abortion a crime at any stage of pregnancy, and the remaining States would soon follow.

Regarding the 14th Amendment, which ensures a right to privacy on which Roe was incorrectly based, Alito wrote: “In interpreting what is meant by the Fourteenth Amendment’s reference to ‘liberty,’ we must guard against the natural human tendency to confuse what that Amendment protects with our own ardent views about the liberty that Americans should enjoy.”

That is why the Court has long been ‘reluctant’ to recognize rights that are not mentioned in the Constitution.

For decades, the left has used the Supreme Court to advance a liberal political and social agenda, bypassing the people’s elected representatives. Now, the issue of abortion and restrictions will be returned to the states, as the 10th Amendment in the Bill of Rights requires.

More than 60 million babies have been aborted in the U.S. since 1973. Many women have come to regret having an abortion. The media have mostly ignored these women.

As with those who died while enslaved, the aborted cannot receive justice. But the Supreme Court ruling will allow more babies to be born, to love and be loved. When grown, they will doubtless say they are happy to be alive, regardless of their station in life.

We have sacrificed much on the altar of pleasure and convenience. Abortion has contributed mightily to the corrosion of culture.

Overturning Roe won’t stop all abortions, just as Prohibition didn’t stop people from drinking alcohol. But it restores a standard that the first right is the right to life.

In addition to the notable and anonymous people deserving of thanks, there is another person without whom this decision might have been delayed for many more years. That person is Donald Trump. The former president named three of the justices in the 6-3 majority.

Whatever else happens to him, this will be his legacy. He kept his promise to nominate constitutionalists.