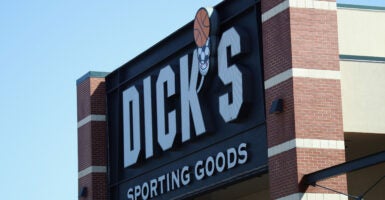 When Dick's Sporting Goods CEO Lauren Hobart announced that the company would join the travel stipend bandwagon, Breitbart News demanded to know if the same $4,000 benefit would be available to pregnant workers who keep their children. Dick’s refused to answer. (Photo: Bruce Bennett/Getty Images)

In the 72 hours since the Supreme Court’s bombshell ruling, the Democrats’ hysteria has sucked up most of the oxygen in the room—and that’s just fine with corporate America. While some CEOs have taken their battle stations on the sinking ship of Roe v. Wade, the bigger story might be how many haven’t.

It’s been an unusually quiet weekend for several of the country’s major brands, who’ve had almost two full months to consider their response. Is it cold feet from Disney’s cautionary tale—or could abortion be the new neutral ground?

The New York Times was just one of the outlets scratching its head over Big Business’ “muted response” to Dobbs v. Jackson Women’s Health Organization.

“Companies are more vocal than ever on social issues,” reporters Emma Goldberg and Lora Kelley insisted. But “not on abortion.” To the Times, the measured reactions were even more noticeable in June, when the pride deluge is so corporately all-consuming.

“Most [brands] stayed silent,” the duo noted, “including some companies that are known for speaking out on social issues such as Black Lives Matter and LGBTQ rights. Some of the corporations that blacked out their Instagram pages in 2020 or featured rainbow flags on their websites for Pride Month have so far been hesitant to comment on abortion.”

“Executives are feeling some trepidation around this,” Dave Fleet, a PR expert at Edelman, admitted. “They’re concerned about backlash because they know there’s no way to please everyone.”

In most boardrooms, there’s a genuine fear about becoming the next Republican target—a fact that was obvious in the ranks of this weekend’s “no comments.” Brands like Coca-Cola and Delta, who outraged Americans by wading into Georgia’s election reform debate last year, were noticeably silent on Roe.

But there are plenty of companies who don’t mind touching the hot stove of the culture wars, as 56 CEOs raced to announce updated “health care” policies that include thousands of dollars in abortion stipends and travel reimbursement:

Those policies come with their fair share of risk, a new poll shows. In a Suffolk University/USA Today survey taken the week before the Dobbs decision, Americans were asked if they thought “corporations have a responsibility to speak out on abortion rights.” A whopping 67.5% said no, companies shouldn’t take sides. Only 27% supported the idea of political involvement.

Those are even higher numbers than the 2021 poll by Rasmussen (66% in favor of neutrality) and Family Research Council’s May 2022 survey (57%), which both found very little appetite for more woke corporate activism.

Disney has been too busy burning its reputation to the ground to notice. CEO Bob Chapek, fresh off of his humiliation in Florida, has all but thrown in the towel on rehabilitating the franchise’s image.

On Friday, employees leaked an internal memo from headquarters, reminding staff that travel benefits for abortion were already available to them. That sparked another heated debate from employees like Jose Castillo, who can’t understand why the company is so dead-set on committing political suicide.

“You see the stock price going down,” Castillo fumed on Fox News. “There are people, there are employees who they’re alienating. I spoke with a colleague the other day who said, ‘I just don’t know how much longer I can keep working for this company.’ And frankly, I’m sure there are going to be guests who are going to be saying, ‘Should I really pay for a ticket to go watch a movie, to go to the theme parks that will eventually end up paying for someone’s abortion?’ Like I said, this was already their policy. There was really no need for them to come out and send this memo, only to make a political statement.”

At Dick’s Sporting Goods, the optics were equally unflattering. When CEO Lauren Hobart announced that the company would join the travel stipend bandwagon, Breitbart News demanded to know if the same $4,000 benefit would be available to pregnant workers who keep their children. Dick’s refused to answer.

It’s a question, legal scholars say, that businesses won’t be able to dodge for long. The inequity of the policy will almost certainly be the subject of court challenges—not only because they unfairly incentivize abortion over child-bearing, but because they also encourage lawlessness.

Robin Wilson, a law professor at the University of Illinois, told Reuters that there could be criminal liability for helping employees duck state laws. “If you can sue me as a person for carrying your daughter across state lines, you can sue Amazon for paying for it.”

For now, conservatives can take some comfort in the slowly changing tides. While certain CEOs will never be deterred from their activism, at least more businesses are starting to think twice about antagonizing half their consumer base. And that, in itself, is a victory.