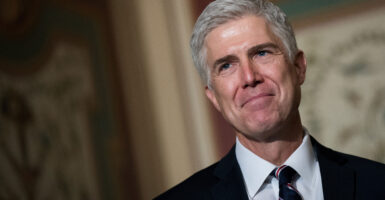 In an 8-1 decision written by Justice Neil Gorsuch, pictured on Capitol Hill on Feb. 1, 2017, the court held that state legislative leaders in North Carolina have the right to intervene in litigation to defend the constitutionality of the state’s voter ID law. (Photo: Drew Angerer/Getty Images)

The Supreme Court’s important ruling last week on voter ID in North Carolina has been overlooked in the fervor over the high court’s spot-on decisions upholding the Second Amendment and religious freedom  and overruling Roe v. Wade.

But the court’s procedural decision Thursday in Berger v. NAACP will help prevent state officials from sabotaging the defense of state election laws and other measures being attacked by their political allies and friends.

The Berger decision did not uphold the constitutionality of North Carolina’s new voter ID law, since that issue was not before the court. But in an 8-1 decision written by Justice Neil Gorsuch, the court held that state legislative leaders in North Carolina have the right to intervene in litigation to defend the constitutionality of the state’s voter ID law.

This is particularly important in a state with divided government. In North Carolina, the state Legislature is controlled by Republicans, while the governor and attorney general are Democrats who oppose any type of voter ID requirement.

As Gorsuch wrote in his majority opinion, “the facts of this case illustrate how divided state government can lead to disagreements over the defense of state laws in federal court.”

The state Legislature passed North Carolina’s latest voter ID law to implement a  voter-approved referendum in 2018 amending the state Constitution to require either a photo ID from voters (available for free from the state with no corroborating documents) or submission of a form explaining why the voter doesn’t have an ID.

After the Legislature overrode a veto by Gov. Roy Cooper, a Democrat, he and the State Board of Elections (all of whose members are appointed by the governor) were sued in federal court by the NAACP, which claimed the law was unconstitutional.

The governor and the election board were “defended” by Attorney General Josh Stein, who as a Democratic state senator had voted against an earlier voter ID law. He even “filed a declaration in support of a legal challenge against it,” according to the court.

Given the opposition of both the governor and attorney general to voter ID, and their “tepid” defense of parallel state litigation, North Carolina House Speaker Tim Moore, a Republican, and Senate President Pro Tem Phil Berger, also a Republican, argued that without their participation, important state interests would not be adequately represented.

Moore and Berger cited a specific North Carolina law that authorizes them to “intervene on behalf of the General Assembly as a party in any judicial proceeding challenging a North Carolina statute or provision of the North Carolina Constitution.”

Not only that, but the same law says that “both the General Assembly and the Governor constitute the State of North Carolina,” giving the state Legislature a direct role in representing the interests of the state.

Despite all of this, a federal district court and the 4th Circuit Court of Appeals ruled that the Legislature could not intervene in the case to defend their voter ID law and that they should just trust the governor and the attorney general to do so.

However, the Supreme Court disagreed, holding that the legislative leaders met the test of Federal Rule of Civil Procedure 24 (a)(2), which allows parties to intervene if they have an interest related to the issues such that if the case is disposed of without their presence, their interests will be impaired or impeded, and the existing parties in the cases will not adequately represent their interests.

According to the Supreme Court, when a state such as North Carolina “chooses to allocate authority among different officials who do not answer to one another, different interests and perspectives, all important to the administration of state government, may emerge.”

In such a situation, “appropriate respect for these realities suggests that federal courts should rarely question that a State’s interests will be practically impaired or impeded if its duly authorized representatives are excluded from participating in federal litigation challenging a state law.”

Allowing such intervention, Gorsuch added in his majority opinion, also “promotes informed federal-court decisionmaking and avoids the risk of setting aside duly enacted state law based on an incomplete understanding of relevant state interests.”

Moreover, he wrote that refusing intervention:

would not only evince disrespect for a State’s chosen means of diffusing its sovereign powers among various branches and officials.  It would not only risk turning a deaf federal ear to voices the state has deemed crucial to understanding the full range of its interests.  It would encourage plaintiffs to make strategic choices to control which state agents they will face across the aisle in federal court.  It would tempt litigants to select as their defendants those individual officials they consider most sympathetic to their cause or most inclined to settle favorably and quickly.

What the Supreme Court is talking about here is forum-shopping and picking political friends as defendants who will try to lose a case rather than vigorously defend it or engage in collusive settlements to eliminate or change a law they don’t like–such as a voter ID law they may have vetoed or voted against.

Such collusive settlements occurred in multiple states in 2020 as liberal groups sued over election laws they didn’t like. That is why this decision by the court, which even Justices Stephen Breyer and Elena Kagan agreed with, is so important to prevent this type of sabotage in this and future cases.

The only justice who dissented was Sonia Sotomayor, who apparently was upset that the court was “implying that the [state] attorney general’s defense of the constitutionality of the voting law at issue here fell below a minimal standard of adequacy.”

No implication is necessary.  Sotomayor seems to have forgotten what the state attorney general did the last time a North Carolina voter ID law made it to the Supreme Court.

Remember that Stein, the attorney general, voted against another voter ID law passed in 2013. That law was upheld by a federal district court in 2016 as both constitutional and not discriminatory, but the decision was reversed by the liberal 4th Circuit.

A petition for certiorari was filed with the Supreme Court in 2016 by North Carolina’s then-Republican governor and attorney general, asking the court to take up the appeal of the decision.

But in the November 2016 election, voters chose Stein as attorney general.  What did Stein do as soon as he assumed office? He withdrew the appeal from the Supreme Court, sabotaging the state’s defense of its own voter ID law, which Stein is under oath to defend.

Lawyers representing the General Assembly objected to the withdrawal of the appeal, accusing Stein of ethical misconduct in a brief and calling his action “a politically motivated attempt to hijack a certiorari petition in a major Voting Rights Act case, in violation of the plain terms of North Carolina law and the canons of professional ethics.”

But the Supreme Court issued a two-page order denying acceptance of the appeal because Chief Justice John Roberts said that it was not up to the court to determine “who is and who is not authorized to seek review in this Court under North Carolina law.”

Contrast Stein’s behavior with that of former Virginia Attorney General Mark Herring, a Democrat, when Virginia was sued over its voter ID law in 2015.  Unlike Stein, Herring followed the ethical course of action by recusing himself because he had voted against the bill when he was a member of the state Senate–just like Stein in North Carolina. Herring hired private counsel to successfully defend the law in federal court.

Yet despite the history of Stein and Cooper in North Carolina, Sotomayor thinks the state Legislature should just trust that the attorney general and the governor will vigorously defend the state’s voter ID law.

Fortunately, the other eight justices did not agree.

The Supreme Court’s decision will make it easier for other state legislatures to intervene to defend their state laws (if they first pass a law such as North Carolina’s to give them that right) when they are faced with the same type of misbehavior: state officials who refuse to do what they swear an oath to do–defend the constitutionality of state laws no matter their personal and political opinions.