A Recipe for Biden Authoritarianism 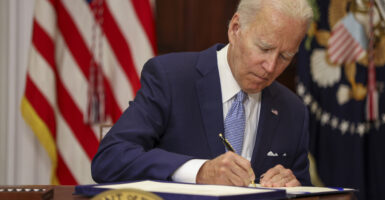 Since the right to keep and bear arms is explicitly protected by the Constitution, removing that right from anyone—even temporarily—requires stringent safeguards for due process. Pictured: President Joe Biden, at the White House on Saturday, signs into law the first gun bill passed by Congress in 30 years, the Bipartisan Safer Communities Act. (Photo: Tasos Katopodis/Getty Images)

A framework for a federal red flag law undoubtedly would be abused by President Joe Biden’s Department of Homeland Security in conjunction with its efforts to take away American citizens’ guns based on speech the left doesn’t like.

After the recent school massacre in Uvalde, Texas, Democrats and Republicans are yet again arguing over gun control and, specifically, what have come to be known as “red flag laws.”

Biden on Saturday signed what some call the most significant gun control measure in decades, a bipartisan compromise that includes a provision to help states put in place red flag laws making it easier for authorities to confiscate weapons from those adjudged as dangerous.

Despite the Supreme Court’s ruling Friday upholding the Second Amendment, we know that the Biden administration will unfairly use anything and everything at its disposal to drive its narrative and silence political opponents.

That’s part of the reason the Department of Homeland Security’s short-lived “disinformation” board received such deserved pushback from many Americans. Although DHS officially paused its Disinformation Governance Board, let’s not be so naïve as to believe the board was the be-all, end-all of the Biden administration’s thought control efforts.

Biden’s DHS has worked before with other departments (including the Department of Education) on disinformation campaigns, and continues to direct efforts toward garnering “public trust surrounding disinformation efforts.”

This certainly seems like a move to further weaponize powerful figures in government agencies to go after cited “online harassment and abuse” and political opinions they deem to be “extremism” and “hate.”

Despite well-founded concerns that the administration will continue efforts to “cancel” those on the right, they largely are allowed to march on. Now, many Democrats and some Republicans argue in favor of giving the federal government more power through red flag laws.

We know that on gun control issues in particular, the left is quick to falsely accuse and slander anyone who dares to speak out in support of the Constitution, the Second Amendment, and common sense.

This was seen most recently during a House hearing, in a tense exchange between Heritage Foundation legal fellow Amy Swearer and Rep. Katie Porter, D-Calif. (Porter is up for reelection, by the way, and has no problem using valuable time during critical committee hearings to create catchy sound bites for herself.)

To begin with, though, red flag laws raise a few fundamental concerns, including serious questions of constitutionality and practicality.

Since the right to keep and bear arms is a fundamental right explicitly protected by the Constitution, removing that right from anyone—even temporarily—requires stringent safeguards for due process.

Among them, the government should meet high burdens of proof to show that a person is a serious risk of danger to himself or others. The necessary due process safeguard ensures that evidence of and definitions for danger are narrow and specific—precisely because the government can’t be trusted not to make anything it wants into a threat.

Additional, heightened concerns come with red flag laws at a federal level, and anyone arguing that the federal government has the constitutional authority to regulate and police the citizenry in this way is grasping at straws.

Red flag laws also do a disservice to individuals who are actually a danger to themselves and/or others. A comprehensive approach addressing mental health concerns, considering underlying factors related to gun violence, encouraging more training in schools and communities, and funding anti-gang violence initiatives, among other things, would more fully address the problems behind mass shootings and other gun crimes.

Since Day One, the Biden administration has taken unprecedented authoritarian measures on a range of issues. Examples include repeated attempts at unilateral, unlawful border and immigration policy and draconian COVID-19 lockdown, mask, and vaccine orders.

Under Biden, the left also has attempted to weaken the power of the Senate like never before. Radical leftists have proved time and time again that they are by no means above imposing their will unconstitutionally.

A president and administration that aren’t shy about questioning or doing away with checks and balances can’t be trusted to uphold other constitutional rights. We can’t expect the Biden administration to administer newfound power fairly when it has a clear track record of targeting those who disagree with it.

Let’s not forget the administration’s pride in the fact that Biden has “taken on the NRA” and continually paints gun owners as extremists. The president has gone so far as to use recent mass shootings to conflate commonly owned “semiautomatic firearms like the Bushmaster XM-15, an AR-15-style rifle” with “ideologies of hate” or “combat-style guns” and “violently pro-white ideologies and groups.”

America is home to at least 81 million law-abiding gun owners. If the federal government had the power to invoke a red flag law, it would be a significant threat to those Americans’ Second Amendment rights.

The right to keep and bear arms not only would be infringed, but—based on the president’s own rhetoric—citizens’ Second Amendment rights could be targeted simply for speech the government decides to flag as dangerous.

The near guarantee that the Biden administration and anti-gun activists would use federal red flag laws coupled with disinformation efforts to punish Americans on the right, label them as “extremists,” and take their firearms should concern us all.

Now is not the time to be silent when it comes to advocating our constitutionally protected rights. It’s time to demand that Congress protect those rights and rein in a government already far too drunk on power.