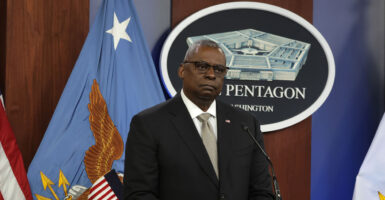 “The [Defense] Department is examining this decision closely and evaluating our policies to ensure we continue to provide seamless access to reproductive health care as permitted by federal law,” Defense Secretary Lloyd Austin says of the Supreme Court's decision in Dobbs v. Jackson Women’s Health Organization. Pictured: Austin speaks at the Pentagon in Arlington, Virginia, May 23, 2022. (Photo: Alex Wong/Getty Images)

The Pentagon pledged to protect “seamless access” to abortion in a statement Friday, citing the potential impact of a landmark Supreme Court ruling on troop readiness.

Currently, the Defense Department does not have procedures for allowing female service members to have abortions if they are stationed in one of the states that bans or tightly restricts the practice, Politico reported.

“Nothing is more important to me or to this department than the health and well-being of our service members, the civilian workforce and DOD families,” said Austin, addressing concerns about abortion access in his written statement. “I am committed to taking care of our people and ensuring the readiness and resilience of our Force.”

“The department is examining this decision closely and evaluating our policies to ensure we continue to provide seamless access to reproductive health care as permitted by federal law,” Austin continued.

Austin has taken the initiative to develop new abortion policies for the military, defense officials told Politico. However, it is not clear whether a new policy will be forthcoming soon.

Although military bases throughout the country provide independent medical services to troops, federal law allows women to seek abortions at military facilities only in the case of rape, incest, or life-threatening pregnancies, according to a fact sheet issued by the Navy.

The military health plan covers abortions sought in private abortion centers only for the same reasons, leaving women to pay for elective abortions, according to the fact sheet.

Abortion advocates with prior military service decried the high court’s decision for negatively affecting their ability to perform their duties after a draft majority opinion leaked in May, DefenseOne reported.

The proposed House defense bill for 2023 would restrict the Defense Department from denying leave requests to women seeking abortions, but does not include funding specifically for travel to states with looser abortion policies. Markups to the Senate version have not been made public.

House Democrats introduced a bill in May that would instruct the military to finance abortions for service members.

The Defense Department did not immediately respond to the Daily Caller News Foundation’s request for comment.