For 22 Years, She Prayed Roe Would Be Overturned 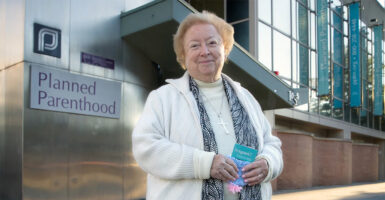 “You still have to pray for the people that cannot see life as a miracle," veteran pro-life activist Eleanor McCullen says. "So prayer is still powerful, we must keep going. But for today, we would say, today is the day to rejoice.” (Photo: Alliance Defending Freedom)

“This is a day for thanksgiving, and a day to rejoice, and to realize that prayers are powerful,” Eleanor McCullen said of the news that the Supreme Court had overturned Roe v. Wade, returning the issue of abortion to the American people and their elected leaders.

McCullen, 85, has been praying for the reversal of Roe for 22 years.

“I think so many people have been praying,” the Boston resident and pro-life advocate told The Daily Signal. “It took perseverance.”

McCullen was running an errand to the library Friday morning when her Catholic priest, Father Tom DiLorenzo, called to ask whether she had heard the news about Roe.

It was at one of DiLorenzo’s prayer services over two decades ago, McCullen says, that she felt called by God to put action behind her pro-life beliefs.

She became actively involved in the pro-life movement in Boston and began praying outside her local abortion clinic. Soon, she began speaking with women who were coming to the clinic for an abortion, counseling them, and providing practical support to those who chose to keep their babies.

McCullen estimates that she has been a part of saving the lives of about 300 babies. Now, she hopes millions of lives will be saved through the Supreme Court’s reversal of Roe.

“We have to go forward and praise the Lord for this decision and realize that many babies will be saved,” she told The Daily Signal, adding that “men and women will also be saved and helped.”

In her 80s, McCullen continues to counsel women who are considering abortion and to walk with them through their pregnancy and beyond.

A woman who is nine weeks pregnant “called me last night to say that she decided she would go ahead with the birth of the baby,” McCullen said. She will continue to counsel the mom and help her, McCullen said, because “she has to know that I’m there and that I’m not going anyplace.”

For women who have had an abortion, McCullen added, she believes God wants them to “know his mercy” and “doesn’t want you to get stuck in that depression.”

“Like the infamous decision in Plessy v. Ferguson, Roe was also egregiously wrong and on a collision course with the Constitution from the day it was decided,” Alito wrote.

Now, the question of regulating abortion returns to the American people and their elected state leaders. Already, 26 states have put laws in place to protect the unborn, but states such as Oregan, Alaska, and Vermont still permit abortion up until a baby is born.

For McCullen, the fight for life is far from over. In her home state of Massachusetts, she says, abortion law “probably won’t change much.”

“[The] constitution in Massachusetts states that you can have an abortion all the way up to the ninth month,” McCullen said.

“We pray for the states as they make their decisions about abortion,” she added:

You still have to pray for the people that cannot see life as a miracle. So prayer is still powerful, we must keep going. But for today, we would say, today is the day to rejoice.