Concerned Parents: Ask Your Children If They’ve Encountered a Drag Queen at School 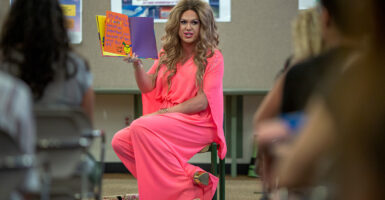 The world continues to change, and as a result, so do our social standards and norms. This change has been a part of the human experience and development since the dawn of creation. However, there are certain standards that have remained untouched, such as the protection of our children and the things they should and should not have access to.

Among developed societies, it has been universally acknowledged that the development of children is so valuable that we should shelter them from some difficult parts of life, such as sex, violence, and drugs, to mention a few. This value is so widely accepted that, for instance, we prohibit the sale of goods manufactured with child labor, we find the thought of child pornography revolting, and the age of consent is very high.

When I say shield, I do not mean to pretend that these things do not exist. Rather, I mean that we have been very sensitive any time any of the aforementioned have been spoken or discussed, especially within the presence of young children. Unfortunately, this standard is slowly deteriorating.

There are many powerful people out there who want to force young children to examine topics such as the intricacies of gender and sex. At what age is it inappropriate to discuss these topics with children? If these topics are to be addressed, shouldn’t parents have a role in where, when, and how? After all, it is precisely the parents who know their children the best; they are endowed with the innate sense of how far to push their child, and as their caretakers they have every right to teach them the principles that they believe to be right.

New York City’s financial records indicate that $200,000 in taxpayer funds were spent in prior years to finance the presence of drag queens in public elementary schools serving children as young as 3 years old. Some parents were not notified of the appearance of these drag queens in advance, and neither they nor their children were offered the ability to opt out. The drag queens would read children LGBTQ-based stories and teach them how to apply drag makeup on occasion.

This is not about being against anybody but rather about raising the issue of whether young children should be exposed to drag queens and drag makeup. I do not believe they should, and it is a topic we must debate as a nation.

Now, if individual parents want to do it on their own time, that is their right and decision. But should every child be compelled to experience it? After all, do macho men attend elementary schools and read to young children books that encourage them to embrace their heterosexuality? No, they do not.

Again, because we care about the impressions we leave on young children and want to preserve their innocence and childhood’s beauty. Permitting drag queens into primary classrooms to read and teach their philosophy will only confuse impressionable children.

How can the school board expect children to understand a man dressed in women’s clothing instructing them on men loving men and women loving women when they have difficulty comprehending sexuality in general?

New York City’s Department of Education justified the appearance of the drag queens based on the fact that it is “life saving” because 57 transgender people were murdered in the United States in 2021 for their identity. Of course, as is typical of the extreme left, this statement is misleading. No report indicates that all or the majority of the killings were motivated by transphobia. In fact, almost every article ignores it.

This is one of the most obvious examples of political intrusion in our educational system. There are school administrators who are willing to expose your children to their political beliefs and principles without your presence or knowledge. They endeavor to care for your children as if they were their own. That is not the role of an educator with children. Their responsibility is to instruct children in elementary arithmetic, science, and English.

Of course, if a child is curious about such topics surrounding sexuality, the educator should notify the parent(s) and let them choose the best method to support the child.

Unfortunately, many school administrators believe they have the authority to invade the minds of young children and instill in them values that serve their desire for power. Maddeningly, they’re not wrong, and with deep pockets and loud voices behind them, they can do just about anything, including use your children as political pawns.

Thankfully, there are countless parents who are outraged and willing to voice their concerns in order to effect change for their children. If we do not appreciate and preserve our children and the beauty of childhood, we will saddle them with a weight much greater than their young minds can bear.