6 Takeaways From Jan. 6 Committee Hearing on Trump’s Pressure on Pence 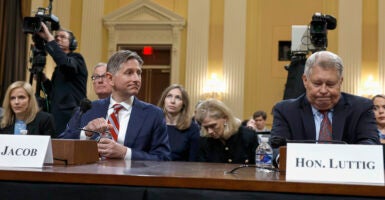 The Jan. 6 committee hearing Thursday focused entirely on former Vice President Mike Pence, his constitutional role in certifying states’ presidential electoral votes, and whether former President Donald Trump’s attorney believed the arguments they were making about the vice president’s authority to unilaterally determine the winner of a presidential election.

Gregory Jacob, former counsel to Pence in the vice president’s office, and retired federal Judge J. Michael Luttig of the 4th U.S. Circuit Court of Appeals, testified before the committee.

Consistent with prior hearings, the committee also made significant use of video presentations from previously recorded depositions, including those of former Trump campaign aide Jason Miller and Trump son-in-law and former adviser Jared Kushner.

The partisan committee is made up of seven Democrats and two anti-Trump Republicans, all of them appointed by House Speaker Nancy Pelosi, D-Calif., after she rejected some of the appointments by House Minority Leader Kevin McCarthy, R-Calif.

The following are six takeaways from Thursday’s hearing:

According to former White House lawyers, neither of Trump’s campaign lawyers—John Eastman, former dean of the Chapman University School of Law, nor Rudy Giuliani, a former New York City mayor—fully believed the vice president had the authority to determine the outcome of the 2020 presidential election.

Jacob recalled a discussion he had with Eastman on Jan. 5, 2021.

“I said, ‘John, if the vice president did what you were asking him to do, we would lose 9-0 in the Supreme Court, wouldn’t we?'” Jacob said. “He initially said, ‘I think we would lose 7-2,’ and after some further discussion, he eventually acknowledged, ‘Well, yeah, you’re right. We would lose 9-0.’”

Jacob said he thought the strongest case was referencing the disputed 2000 election result, when then-Vice President Al Gore presided over a joint session of Congress, certifying his own defeat and the election of then-Texas Gov. George W. Bush.

Jacob further warned that if a precedent were set, Vice President Kamala Harris could try the same thing in 2024.

Jacob said he told Eastman, “John, back in 2000, you weren’t jumping up and saying Al Gore had this authority to do that. You would not want Kamala Harris to be able to exercise that authority in 2024, when I hope Republicans will win the election. I know you hope that, too, John.”

In response, he said Eastman told him: “Absolutely. Al Gore did not have a basis to do it in 2000. Kamala Harris shouldn’t be able to do it in 2024, but I think you should do it today.”

“The vice president’s instinct here is so decisive,” Jacob said. “There’s just no way that the Framers of the Constitution, who divided power and authority, who separated it out, who had broken away from [King] George III and declared him to be a tyrant, there is no way they would have put in the hands of one person the authority of determining who was going to be president of the United States.”

“He was asking me my view and analysis, and the practical implications of it, and when we finished, he said, ‘Look, I believe that you know. You’re probably right,’” Herschmann said, claiming to be quoting Giuliani.

The committee played a video showing Giuliani speaking at the Jan. 6, 2021, rally, declaring, “Every single thing that has been outlined as the plan for today is perfectly legal,” and “the vice president can … decide on the validity of these crooked ballots.”

The committee showed a video presentation about what people remembered about a call between Trump and Pence on the morning of Jan. 6, 2021.

Nicholas Luna, an assistant to the president in the Trump White House, said in video deposition: “As I was dropping off a note, I remember hearing the word ‘wimp.’ Either he called him a ‘wimp,’ or he said, ‘You are a wimp,’ or, ‘You’ll be a wimp.’ ‘Wimp’ is the word I remember.”

He added that Trump said “something to the effect that ‘I made the wrong decision four or five years ago.’”

“When I entered the office the second time, he was on the phone with who I later found out to be the vice president,” the former president’s daughter, Ivanka Trump, said in her video deposition. “The conversation was pretty heated.”

Another clip showed the former first daughter saying, “It was a different tone than I’ve heard him take with the vice president before.”

Julie Radford, Ivanka Trump’s chief of staff in the White House, was shown telling committee staff investigators that her boss said, “Her dad just had an upsetting conversation with the vice president.” Asked what Trump called Pence, Radford said, “the p-word.”

3) Vice President ‘Refused to Get Into Car’

Some of Pence’s security detail encouraged him to leave the Capitol while the riot was going on, and when it was clear he was a target of rioters chanting, “Hang Mike Pence.”

But he refused, Jacob recalled.

“The head of his Secret Service detail, Tim, had said, ‘I assure you, we are not going to drive out of the building without your permission.’ The vice president said something to the effect, ‘Tim, I know you, I trust you, but you are not the one behind the wheel,'” he said.

He was determined that we would complete the work that we had set out to do that day, that it was his constitutional duty to see it through, and that the rioters who had breached the Capitol would not have the satisfaction of disrupting the proceedings beyond the day which they were to be completed [by].

During Thursday’s committee hearing, Republicans on the House Judiciary Committee tweeted, “1. The January 6th Committee ‘news’ is dominated by those inside the D.C. bubble. 2. The Committee hasn’t produced any new bombshell evidence. 3. Normal Americans want to know why gas is $5 per gallon.”

House Republicans tweeted out a clip of an interview of committee member Rep. Jamie Raskin, D-Md., on CNN, where host John Berman pressed him if anything new would come from the hearings.

“New evidence is coming forward. There are new things being revealed on an almost daily basis now,” Raskin said.

Berman asked, “Can you give me an example of that?”

Herschmann said Eastman called him on Jan. 7, 2021, the day after the Capitol riot. In a clip from Herschmann’s video deposition, Eastman talked to him about an appeal in Georgia even after Congress certified the Electoral College votes of every state, Herschmann said.

“I told him, ‘I only want to hear two words coming out of your mouth from now on—orderly transition,’” Herschmann said. “Eventually, he said, ‘orderly transition.’ I said, ‘Good, John. Now I’m going to give you the best legal advice you’re ever getting in your life. Get a great “effing” defense lawyer. You are going to need it.’ Then I hung up on him.”

After that, committee member Rep. Pete Aguilar, D-Calif., showed an image on the large screen that Eastman sent an email to Giuliani: “I’ve decided I should be on the pardon list, if that is still in the works.”

Then video was shown of Eastman’s testimony, in which he said, “I assert my Fifth Amendment right against being compelled to be a witness against myself.”

Had Pence followed Trump’s order to either not count certain electors or send the election back to the states, it would have caused a constitutional crisis, said Luttig, the former federal judge.

“That declaration of Donald Trump as the next president would have plunged America into what I believe would have been tantamount to a revolution within a constitutional crisis,” said Luttig, who was appointed to the 4th U.S. Circuit Court of Appeals by then-President George H.W. Bush and served from 1991 to 2006.

He said there was neither constitutional nor historical evidence for the interpretation that the vice president could decide the next president.

“There was no support whatsoever, neither in the Constitution of the United States nor the laws of the United States, for the vice president, frankly, ever, to count alternative electoral slates from the states that had not been officially certified by the designated state official in the Electoral Count Act of 1887,” Luttig said.

He contradicted the claims of Eastman, his former law clerk, that there was historical precedent.

“There was no historical precedent from the beginning of the founding, in 1789, that even has near historical precedent, as distinguished from legal precedent, would support the possibility of the vice president of the United States, quote, ‘counting alternative electoral slates’ that had not been officially certified to the Congress pursuant to the Electoral Count Act of 1887.”