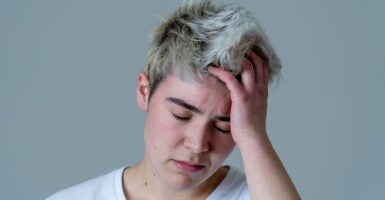 When Julie woke up from her double mastectomy in the children’s hospital in Syracuse, New York, she expected to feel elated. Instead, she only felt numb.

It wasn’t supposed to be like this, she thought. Years later, she looks back with anger at the “collaborative idiocy” that crushed her spirit, permanently scarred her body, and left her feeling empty, betrayed, and alone.

“I have this intense rage in me over the harm that was done to me,” Julie told journalist Suzy Weiss. Like so many victims of the mutilating treatments this White House calls “lifesaving,” Julie will never fully get her life back. We’ve gone too far, the survivors of this movement are crying out.

And no one, based on Fox News’ latest transgender puff piece, is listening.

For the last handful of years, no one’s been under the impression that Fox News is particularly conservative. But at least it was reasonable, many thought. After Friday’s glowing endorsement of transgenderism, the benefits of those doubts are gone. “What extraordinary courage displayed by Ryland [Whittington],” the hosts gushed, as pictures of an adorable little girl faded into the present, where a 14-year-old boyish face filled the screen.

Calling the parents’ decision to experiment with Ryland’s sex “inspiring,” the network plainly used the segment to give cover to an ideology that’s abusing children the world over.

“Relatable” host Allie Stuckey was just one of the horrified viewers, who called the propaganda “as extreme and depraved as it gets.” Outrage poured in from all sides, as people struggled to understand how it served Fox to go “full groomer.”

Maybe the network was trying to get back into the Human Rights Campaign’s good graces, after being dinged on this year’s Corporate Diversity Index after years of a perfect score. Still, the idea that anyone could be supportive of a movement so sinister and lethal to children is mind-boggling to viewers, who’ve seen the heartbreaking results firsthand.

The pain and regret from teenagers who latched on to these new identities because of the adults in their lives is real.

For Suzy Weiss, who tells their stories, the emotions are difficult to contain. In a powerful piece called “The Testosterone Hangover,” Weiss is a witness to the agony of these trusting souls—women who were pushed along a path that would ultimately destroy their young adulthood.

Chloe was only 15 when her mother sat nervously in the waiting room, waiting for word on her daughter’s breast removal. Like so many of the teenagers sucked into this world, she was unhappy with how she looked and spent a lot of time on Tumblr, immersed in trans messaging.

She remembers sitting on her bed at the tender age of 12, wondering if she was meant to live as a boy. Two years later, Weiss recounts, she was taking puberty blockers and testosterone injections. By June of 2020, she was wheeled into an operating room for a drastic surgery that she would regret for the rest of her life.

Eleven months later, she was still confined to her bed, struggling with the restrictions of “nipple grafts” and other side effects. She started to miss “being pretty” and made the brave announcement that she was going to detransition—a move that made her even more of an outcast at school.

Today, she misses the feminine body that she left behind. “I was looking for a niche to fit in and a sense of fulfillment.” Now, she tells Weiss, “I don’t really believe in gender identity at all.”

Meanwhile, people at the highest levels of government seem fixated on casting our sons and daughters in these horror stories—even going so far as to force taxpayers to fund the harm.

Rep. Mary Miller, R-Ill., one of the many Republicans appalled by Health and Human Services Secretary Xavier Becerra’s insistence that children are “entitled” to these treatments, pushed back. She demanded to know if it was “child abuse,” as the American College of Pediatricians has labeled it, to perform sterilizing surgeries on kids as young as 12. He refused to answer.

“[The Biden administration is] doing nothing but engaging in extreme woke politics with children being their victims,” she said angrily on “Washington Watch.” “I can’t even think of enough bad adjectives to describe this. It’s evil, it’s insane.”

And places like Fox News are enabling it, despite the medical community’s open admission that puberty blockers are not “fully reversible.”

The Society for Evidence-Based Gender Medicine has warned repeatedly that “[l]ittle is known about the long-term side effects of hormone or puberty blockers in children with gender dysphoria.”

As experts repeatedly point out, several of these hormones are off-label drugs that haven’t been studied for their impact on children. But there are plenty of things experts do know about the side effects, including: “When puberty blockers are administered in early puberty and followed by cross-sex hormones,” the Society for Evidence-Based Gender Medicine notes, “sterility is expected.”

Even transgender activists—many of whom blazed this trail and underwent radical operations themselves—have been horrified at the rush to transition children. One, a doctor, is speaking out publicly—sounding the alarm that this wave is rooted in social influence, not genuine gender dysphoria.

“I have these private thoughts: ‘This has gone too far. It’s going to get worse.’ I don’t want any part of it,” said Erica Anderson, who, until recently, was “on the forefront of transgender care.” Anderson underwent dramatic surgery in his late 50s, but believes strongly that the pendulum has swung “to an extreme.”

“A fair number of kids are getting into it because it’s trendy,” Anderson told The Washington Post. “I think in our haste to be supportive, we’re missing that element … . Teenagers influence each other.” Anderson thinks kids are leaning into gender treatments, hoping it helps with other psychological problems—and then struggle to dig out of the depression when it doesn’t.

“I have a dictum: When in doubt, doubt,” Anderson told the Los Angeles Times. “Questioning is a good thing. How are you going to find out if you are lockstep with whatever conclusion you come to first?”

Helena Kerschner, an outspoken detransitioner with one of the biggest platforms, is grateful for anyone who raises a red flag. “I had a ton of issues with my academics and my mental health, but I never really got help with that,” Kerschner said. “As soon as I said I was trans, it was all hands on deck.” But after a year and a half on drugs, she started to cut herself. “The reality I was living was not lining up with the fantasy I’d had as a teen … . It was a crushing and terrifying feeling.”

To her, this White House’s obsession with gender treatments is terrifying. “The fact that there [are] adults as high up as in the Biden administration putting out these claims that young people need to medically transition is really dangerous. There’s no logic to it.”

Fortunately for this generation, there are leaders like Miller who will lay it all on the line to stop more Julies, Chloes, and Helenas from living this nightmare. When the left’s bullies come after her, she says, “I’m going to fight back. If they want to fight, they can bring it on. Because … I’m not backing down.”

Thank goodness. Today’s children need someone in their corner—since it’s obvious the “fair and balanced” media is not.

For more on the mountain of facts Fox News’s glowing report is covering up, check out the Family Research Council’s paper by Jennifer Bauwens, “Transgenderism Has a Science Problem.”

Editor’s note: This article has been updated to note that Julie’s remarks were made to journalist Suzy Weiss.