Democrats’ Jan. 6 Fiasco Is Just Another Example of Conservatives Being Treated as Second-Class Citizens 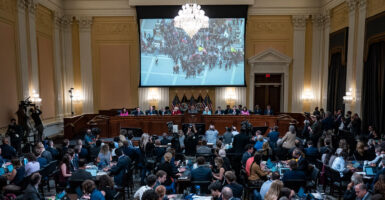 Video of the Capitol riot is shown on a screen during the second hearing held by the House Select Committee to Investigate the January 6th Attack on the United States Capitol on June 13, 2022, on Capitol Hill in Washington, D.C. (Photo: Jabin Botsford-Pool/Getty Images)

Both omissions by the Jan. 6 barkers are just the latest examples of a flagrant, two-tiered justice system that treats conservatives—especially anyone supporting Trump—as second-class citizens.

There were many troubling conflicts of interest at Michael Sussman’s D.C. Beltway swamp trial venue. A reported 3 of the 12 jurors were Hillary Clinton donors, and as Open Secrets reports, just 1.6% of U.S. adult women and 2% of men have given $200 or more in political donations. In other words, only the most truly committed believers put dollars behind their political ideology.

Given the District of Columbia has a much higher per capita of donors because of its professional political class, sure it might have been a little harder to find a non-Clinton donor, but given the hyperpartisan nature of the attacks lobbed by the Clinton campaign, these donations should have been grounds for jury dismissal.

Cooper also refused to grant prosecutor John Durham’s request to dismiss a juror whose daughter is a crew teammate of Sussmann’s own daughter. And Cooper limited the evidence and testimony prosecutors could bring.

In another instance of the DOJ’s double standards, former President Barack Obama’s attorney general, Eric Holder, faced no repercussions after Congress held him in contempt for refusing to comply with its Fast and Furious investigation. Meanwhile, former Trump adviser Peter Navarro was put in leg irons during an ambush arrest at the airport for the same charge of contempt.

And let’s not forget the 51 former “intelligence” officials who wrote an open letter calling the Hunter Biden laptop story (verified by even leftist media outlets like The New York Times) Russian disinformation. They’ve faced no professional sanctions, no stripping of security clearances, even though they refuse to apologize.

A repeated line by the left is that conservatives are a threat to democracy because they erode “democratic norms.” With norms like this ongoing pattern of botched justice, it’s no wonder the right has finally started to revolt and ask for equal protection under the law.