Another ‘Big Lie’ About Trump: He ‘Mocked’ a Disabled Reporter 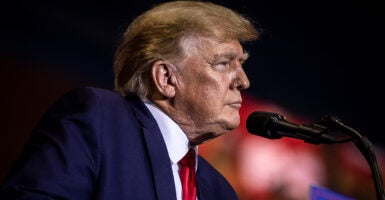 The left-wing media has pretended for years that former President Donald Trump mocked a disabled reporter. Pictured: Trump speaks at a rally on May 28 in Casper, Wyoming. (Photo: Chet Strange/Getty Images)

An August 2016 Bloomberg poll listed the top reason given by “likely voters” for disliking then-presidential candidate Donald Trump: He “mocked” a disabled reporter.

About the poll, NBC wrote:

Democrats have made sure the public has seen and heard about Trump’s extended riff over and over again. It has been played in ads created by the Clinton campaign, including a highly circulated one involving children silently watching, and by groups working on Clinton’s behalf. Bill Clinton even said in his convention speech that his wife ‘never made fun of people with disabilities. She tried to empower them based on their ability.’

In 2015, Trump claimed that on the day of the 9/11 terror attacks, “thousands and thousands of people were cheering” in Jersey City, New Jersey, as the Twin Towers fell. To back up his claim, Trump pointed to an article co-written by the then-Washington Post reporter Serge Kovaleski.

The article said, “Law enforcement authorities detained and questioned a number of people who were allegedly seen celebrating the attacks and holding tailgate-style parties on rooftops while they watched the devastation.”

When asked about Trump’s statement, Kovaleski said, “I certainly do not remember anyone saying that thousands or even hundreds of people were celebrating. That was not the case, as best as I can remember.”

I had a close friend of over 40 years. His beloved son was born with special needs. I supported Trump in 2016 and campaigned with and for him. Because of Trump’s alleged ridicule of the reporter, my friend ended our friendship, despite my best effort to convince him that he was wrong.

First, Kovaleski does not flail his arms as did Trump when he made fun of him. Kovaleski has a condition called arthrogryposis, described by HopkinsMedicine.org as a “variety of conditions involving multiple joint contractures (or stiffness). A contracture is a condition where the range of motion of a joint is limited. It may be unable to fully or partially extend or bend.” He does not gyrate as did Trump when he “mocked” the reporter’s condition. Kovaleski is a calm and steady speaker.

Second, Trump, for years, has used the same “mocking” gesture to ridicule others, including himself, as well as an able-bodied general, as shown by videos on a website called Catholics4Trump.com.

Investor’s Business Daily published a commentary with the headline “Fake News: Trump Did Not Mock Disabled Reporter and Other Lies From the Left.” It said:

The truth is, Trump has often used those same convulsive gestures to mimic the mannerisms of people, including himself, who are rattled and exasperated. Why couldn’t the mainstream media look this up? Gavin McInnes of TheRebelMedia.com and Taki’s Magazine did, and he has the video evidence to show that Trump has a history of flailing his arms to make a point. It isn’t something he reserved for Kovaleski. …

Why have we seen no images of Kovaleski moving the way Trump is moving? In every video and photograph of Kovaleski we’ve seen, he is calmly standing still with his right arm held firm against his chest. He’s not waving his arms uncontrollably.

As for my former friend, he is brilliant; he received a perfect score on his SAT and nearly that high a score on his LSAT. But, after I sent him a lengthy letter defending Trump, with a link to the aforementioned website, he remained angry and unconvinced. It occurred to me that once people—no matter how bright—decide they hate Trump, they do not wish to un-hate him.