Someone Just Tried to Kill Brett Kavanaugh. Welcome to the New Normal. 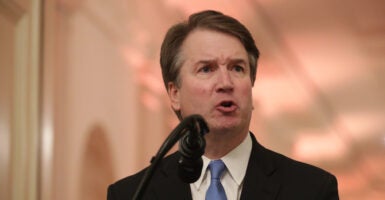 An assassination attempt was the inevitable conclusion of the anything-goes mentality toward the rule of law displayed by the radical left. Pictured: Supreme Court Justice Brett Kavanaugh speaks Oct. 8, 2018, after his ceremonial swearing-in as a Supreme Court justice at the White House. (Photo: Chip Somodevilla/Getty Images)

I was at the Supreme Court the night of May 2, when the news broke, based on a leaked draft opinion, that the high court likely would overturn its 1973 Roe v. Wade decision.

I remember thinking that the rage expressed by the radical activists outside the Supreme Court Building was bad. But I never imagined how much worse things would get.

Early Wednesday morning, police arrested an armed man near the home of Supreme Court Justice Brett Kavanaugh in Chevy Chase, Maryland. The man told investigators he’d traveled all the way from California to break into Kavanaugh’s house and kill the justice, then kill himself.

The man apparently told police that he was driven to kill Kavanaugh because he was angry that the justice likely had voted to overturn Roe.

The would-be assassin also was reported to be upset over the recent mass shootings in Buffalo, New York, and Uvalde, Texas. He believed Kavanaugh planned to vote to loosen gun laws, and his eliminating the justice would avoid that.

Although Americans were shocked at how far pro-abortion advocates were willing to go to get what they wanted, I wasn’t. I knew an assassination attempt was the inevitable conclusion of the anything-goes mentality displayed by the radical left.

Each night over the past few weeks, angry protesters have made their way to the home of one of the conservative Supreme Court justices. They have tried to intimidate one or more of the justices into voting to uphold Roe v. Wade, which legalized abortion on demand across the nation.

In the words of one protester on her way to the houses of both Kavanaugh and Chief Justice John Roberts: “You don’t get to take away our bodily autonomy and enjoy your Saturday night at home.”

That same protester said the high court’s apparent majority decision to overturn Roe was “personal,” and she wanted to bring it to the justices’ “personal space.”

As my colleagues have noted on multiple occasions, these ongoing assaults on the justices’ neighborhoods are clearly illegal and go past mere protesting.

Cully Stimson, a senior legal fellow at The Heritage Foundation who happens to be a neighbor of Justice Amy Coney Barrett, explained a federal law that clearly has been broken by these protesters. (The Daily Signal is Heritage’s multimedia news organization.)

The law cited by Stimson reads:

Whoever, with the intent of interfering with, obstructing, or impeding the administration of justice, or with the intent of influencing any judge … in the discharge of his duty, pickets or parades … in or near a building or residence occupied or used by such judge … shall be fined under this title or imprisoned not more than one year or both.

And yet the authorities do nothing. Until recently, the Biden administration actively encouraged protesters to go to the justices’ homes and violate federal law.

Last month, then-White House press secretary Jen Psaki told reporters: “I know that there’s an outrage right now, I guess, about protests that have been peaceful to date, and we certainly do continue to encourage that, outside judges’ homes, and that’s the president’s position.”

Beyond the justices’ homes, incidentally, pro-life organizations have seen their offices vandalized and even burned to the ground.

All to crickets from the Biden administration.

As someone who has been out in the field these past weeks following these groups, I know it’s a straight line between the behavior being encouraged by the Biden administration and the horrific crime the country dodged Wednesday.

Anyone watching the videos I took outside the residences of Kavanaugh and Roberts can feel the hatred directed toward these men. These crowds, given the chance, would rip them to shreds.

Moving past the illegal attempt by protesters to subvert the justice system through banana republic-style intimidation, their nightly visits to the justices’ neighborhoods produce another set of victims: the neighbors.

When I visited Barrett’s neighborhood last week as pro-abortion protesters descended on a quiet cul-de-sac for the fifth week in a row, they were blaring music that contained obscenities. It got so bad, a neighbor came out to plead with them to turn the music down.

The protesters just smiled smugly and told the neighbor they couldn’t do anything about it.

Until there are ramifications for these constant attempts to coerce Supreme Court justices into keeping Roe, the nightly intrusions will continue. Neighborhoods will suffer as these lunatics continue to invade.

Worst of all, this attempt on Kavanaugh’s life may not be the last.

I have seen the lengths these people are willing to go in their crusade to keep abortion legal up to and including the time of delivery. If an assassination attempt isn’t enough to get law enforcement and government to act to prevent protesters from harassing the justices, I don’t think anything will be.

The Supreme Court’s final decision to overturn Roe v. Wade hasn’t even dropped yet. I shudder to think of the violence the radical left will unleash once it does. For the sake of our republic, I hope I’m wrong and that these activists finally face justice.

In the meantime, Americans had best be prepared for more headlines like Wednesday’s. Violence is coming; I’ve seen it brewing with my own eyes.