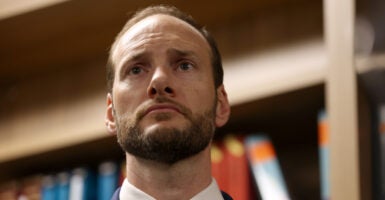 San Francisco’s radical, left-wing district attorney, Chesa Boudin, has been recalled by voters in a stunning rebuke of the anti-police, anti-law enforcement policies he and other rogue prosecutors have pursued in recent years.

The Associated Press called the election at 12:04 a.m. ET Wednesday, reporting that early returns showed 61% in favor of recalling Boudin in what was expected to be relatively light turnout.

For the literati left, there must be a way to make sense of the recall vote Tuesday without impugning Boudin, 41, or his policies.

Of course, for sour grapes progressives who need to make this all fit with the Narrative, there’s an alternative explanation for all this.

It just can’t be San Francisco’s high crime and Boudin’s association with reckless, anti-law enforcement policies—mostly cheered on by the left—that have gone alongside it. Of course not.

Amusingly enough, a left-wing writer blamed San Francisco’s problems on the city being too right wing.

Yes, you heard that right.

Justin Miller, writing in New York magazine, explained that San Francisco isn’t really left wing because it’s too wealthy and has a declining black population. It’s being taken over by the tech industry.

Miller further contended, and said again on Twitter, that the city is less progressive than everyone thinks because it had “Republican mayors for most of the 20th century.”

Besides the fact that we are currently nearly a quarter of the way into the 21st century, the last Republican mayor of San Francisco left office in 1964. Why not just blame the Whig Party for the city’s troubles, too?

Undoubtedly, they’ll trot out Ronald Reagan, who left the California governor’s office in 1975, as the one culpable for all of California’s troubles, too.

The amount of twisting and turning here from MSNBC host Chris Hayes to excuse Boudin’s failures is almost amusing.

Yes, Boudin was likely affected by his parents’ “incarceration.” Hayes doesn’t elaborate, but their incarceration wasn’t for some petty crime, it was for domestic terrorism.

Boudin’s parents, members of the violent Weather Underground, were found guilty in the 1981 murder of two police officers and a security guard. It appears their son, raised by the notorious Bill Ayers, found more “subtle” ways of destroying our justice system.

Regardless of this absurd narrative peddling to help the left-wing faithful cope, San Francisco’s problems run deep and are quickly worsening. For decades, crime was in decline in the country. But in 2020, after the death of George Floyd at the hands of police in Minneapolis and the protests and riots that followed, violent crime shot up at historic rates.

That trend didn’t abate and has continued to worsen in places like San Francisco, where there was not only a serious and “successful” effort to defund the police but a radical district attorney in place—the now-deposed Boudin—who was eager and open about his desire to prosecute as few crimes as possible.

San Francisco Mayor London Breed reversed the decision to defund police after crime spiked, but it seems much of the damage had been done. And of course, Boudin continued to let criminals off the hook. Quality law enforcement can’t exactly deter crime if criminals know they won’t be punished.

The picture in San Francisco is grim. Until recently, San Francisco had relatively lower violent crime rates compared to other big cities. Like with much of the country, crime in general had been in long-term decline. But things change quickly.

Here’s how The Wall Street Journal described the state of San Francisco:

In 2021 homicides in San Francisco were up 36% compared to 2019. Last year 222 people were wounded or killed by gun violence in the city, compared to 137 in 2019. Motor vehicle theft is up 36%, arson 40%, and larceny up 20% in 2021 compared to 2019. These official property crime numbers are likely low, as some victims no longer bother to report crimes they know won’t be investigated or punished.

The Wall Street Journal also reported that among the 25 largest cities in the country, San Francisco had the highest amount of property crime in four of the most recent six years.

In the City by the Bay, it’s not just violent crime that is up; like many other cities, it’s all kinds of crime. After a short dip at the beginning of the pandemic, property crime shot up.

Again, according to the Journal: “Burglaries in the city are at their highest levels since the mid-1990s. There were 20,663 thefts from vehicles last year—almost 57 a day—a 39% increase from the prior year, although still below the record of 31,398 in 2017, according to the police.”

According to one online database, San Francisco is safer than just 4% of U.S. cities. It has suffered a steep population loss.

In addition, there has been a growing number of reported crimes committed against Asian residents of the city. This problem has been festering for a while, but is now intolerable.

Now, does Boudin’s recall signify a shift away from the hard-left in San Francisco? Probably not, though perhaps those who voted against him will question the ideology that’s controlled the city for so long. As we’ve seen with the city’s school board elections, when the voters throw out a pack of hard-left incompetents, similar people often just step in and replace them.

Regardless, Boudin’s recall is significant. Even in left-wing San Francisco, people are fed up with rising crime both there and elsewhere.