Congress Ignores Pressing National Business While It Obsesses on Jan. 6 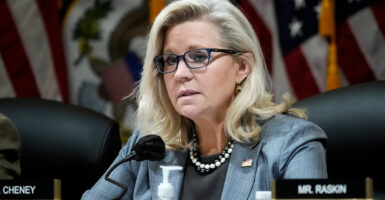 The Jan. 6 House committee announced on its website that Jan. 6 was “one of the darkest days of our democracy.” Pictured: Rep. Liz Cheney, R-Wyo., speaks during a committee meeting on March 28 on Capitol Hill in Washington, D.C. (Photo: Drew Angerer/Getty Images)

As the House Select Committee to Investigate the January 6th Attack on the United States Capitol starts public hearings, we must ask what motivates those on the committee.

Is the sole concern the ideals of the Declaration of Independence and the Constitution of the United States? Or is it to get media to attack and undermine political opponents?

It is indeed possible that infractions of law can be investigated without a carnival platform designed to mobilize media and national attention.

The public material of the committee already reeks of motivations other than seeking truth.

The committee has already announced on its website that the Jan. 6 incident was “one of the darkest days of our democracy.”

Really? Against a civil war where some three-quarters of a million Americans were killed, fighting over what American freedom is about, one incident of a few hours, where law enforcement finally prevailed, was one of our “darkest days”?

There are just 24 hours in any day, so time taken on one matter means attention not given to other matters.

If these members of Congress really cared about our principles of freedom and democracy, they wouldn’t be ignoring every day other pressing matters in which the freedom of American citizens is blatantly violated.

Take, for example, that as the Jan. 6 investigation monopolizes media attention, on June 3 the trustees of Medicare and Social Security issued their annual report.

Both systems are bankrupt and in dismal shape financially.

The cash shortfall of Medicare in 2021 was $409 billion. Projection is that Social Security will be out of adequate cash flow to meet obligations to retirees by 2035—just 13 years from now.

The trustees estimate that there are only adequate funds in Social Security to meet 80% of benefits in 2035. The payroll tax, now 12.4%, would have to be raised 26% in order to generate sufficient funds to meet those obligations.

In other words, today every working American age 55 and below who plans to collect Social Security benefits at age 67 is paying a payroll tax into a system that cannot provide the benefits promised.

The lawsuits would be flying.

Let’s forget about the fiscal situation of the system for a minute and whether it is even worth saving this program. How about the issue of freedom that our members of Congress want us to believe they care about so much?

Take a young citizen, age 21, fresh with his or her new degree, entering the work force for the first time. Immediately, 12.4% of their paycheck is deducted into a system they involuntarily enter, in which there are inadequate funds to meet promised benefits.

Shouldn’t this new young worker be able to say, “No, thank you, I don’t want to participate”?

Even if the system were not broken, and benefits could be met, in our free country, shouldn’t everyone be free to manage their own retirement?

According to the Committee to Unleash Prosperity, the average return of Social Security over the last 40 years was 1%. Over the same period, average return on stocks was 6%.

Back to this new young worker, by the calculations of the Committee to Unleash Prosperity, this single worker, if they earned the median national income and were able to invest 10% of their income into a diversified stock and bond portfolio over 40 years, instead of paying the payroll tax, could have annual income at retirement of $55,143 against $19,646 from Social Security.

So, hey, members of the select committee. Enough of pretending that you care about American freedom. How about wrapping up the carnival and getting down to the real challenges every American faces today?