Biden Silent on Slaughter of Dozens at Church in Nigeria 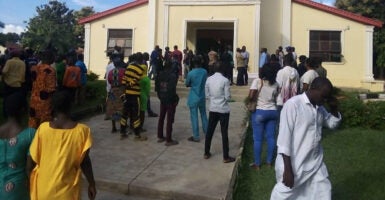 An unknown number of gunmen killed as many as 50 worshipers Sunday during Mass at St. Francis Catholic Church in Ondo, a state in southwestern Nigeria.

As of Wednesday morning, no group had claimed responsibility for the massacre, nor had President Joe Biden, himself a Catholic, made public remarks on it. The White House did not issue a statement, nor did it respond to The Daily Signal’s request for comment Tuesday.

Authorities said the death toll in the town of Owo was uncertain because relatives were believed to have carried some bodies away. The gunmen, who apparently also set off explosives, were both inside and outside the church as worshipers celebrated Pentecost Sunday, ABC News reported.

In 2020, the Trump administration identified Nigeria as a “country of particular concern” for crimes against religious freedom. The Biden administration removed Nigeria from the list ahead of Secretary of State Antony Blinken’s visit there last year during his tour of Africa.

In June 2021, a State Department report recorded over 10,000 violent deaths in Nigeria. Over 1,000 of those violent deaths involved conflicts between groups of different ethnicities or religions.

Joshua Meservey, a research fellow at The Heritage Foundation who specializes in counterterrorism and Africa, told The Daily Signal that the Nigerian government “fails to protect its citizens from religiously motivated violence” through incompetency and lack of will to do so.

“That alone should have required the Biden administration to keep Nigeria on the list,” Meservey said.

The Biden administration’s delisting of Nigeria as a country of concern “was not called for,” former Kansas Gov. Sam Brownback, the Trump administration’s ambassador at large for international religious freedom, said before the massacre, The Washington Stand reported.

“The situation continues to be terrible, and that’s shown forth, as well, in the report,” Brownback said.

>>> Related: The Horrific Killing of Christians in Nigeria