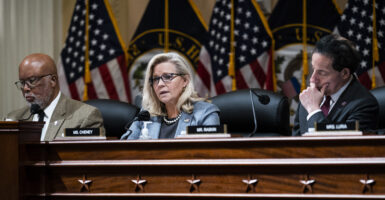 The House panel investigating the Capitol riot is going prime time Thursday night with a nationally televised hearing packaged as if it were a slick network special.

It’s been about 500 days since the riot on Jan. 6, 2021, that saw hundreds enter the Capitol building after others forced their way in. Some intruders apparently aimed to stop a joint session of Congress from certifying the Electoral College votes showing Joe Biden defeated incumbent Donald Trump in the 2020 presidential election.

Many Democrats say that what unfolded that day was “an insurrection” designed to undo the election results and install Trump for a second term.

The partisan House panel, officially called the Select Committee to Investigate the January 6th Attack on the United States Capitol, is made up of seven Democrats and two Republicans. House Speaker Nancy Pelosi, D-Calif., solidified the panel’s membership after blocking the choices of House Minority Leader Kevin McCarthy, R-Calif.

The committee hired former ABC News President James Goldston to mount a multimedia presentation for TV viewers with top production values. All three major TV networks—CBS, ABC, and NBC—announced that they will preempt at least one hour of prime-time programming to air the hearing.

CNN and MSNBC both said they will air the hearing, as did Fox Business, but Fox News Channel announced that it won’t preempt its regular schedule. Newsmax said it also would air at least one hour.

After holding two public meetings, the select committee has done most of its work behind closed doors.

Here are six points to anticipate ahead of the hearing Thursday night, which reportedly will include video excerpts of earlier testimony as well as other previously unseen photos and video.

Some members of the committee as well as journalists have hinted that the hearing will spotlight stunning revelations linking the organizing of the Capitol riot directly to Trump, who spoke at a nearby rally earlier in the day.

“[T]he House Select Committee on the January 6 Attack was far along in its investigation: It had issued 86 subpoenas, interviewed more than 500 witnesses and obtained 60,000 pages of records,” Woodward and Bernstein wrote in a piece published 12 days before the 50th anniversary of the Watergate break-in.

“As of this writing, the committee had an abundance of evidence that the insurrection was a Trump operation—and committee members have vowed to push further,” they wrote.

In an interview that aired Sunday on CBS News’ “Face the Nation,” committee Vice Chairwoman Rep. Liz Cheney, R-Wyo., was asked whether the Jan. 6 riot was part of a conspiracy.

“I think, certainly, I mean, look, if you look at the court filings,” Cheney began to say, before CBS reporter Robert Costa, previously with The Washington Post, pressed again: “But do you believe it was a conspiracy?”

Rep. David Cicilline, D-R.I. told CNN that he expected the committee to present evidence of planning for an attack on the Capitol.

“There will be, I think, substantial evidence that really demonstrates the coordination and the planning and the effort,” Cicilline said, “despite the fact that they understood that Donald Trump lost the election and even once the insurrection began and the violence began, there were ongoing efforts to persuade the former president to stop the violence and call on folks to go home, and he refused to do it.”

Trump, however, has said he authorized 10,000 National Guard troops to be deployed to the Capitol grounds before his Jan. 6 rally challenging the election results, which was held on the Ellipse, a park south of the White House. Critics of Pelosi have said the House speaker refused the presence of troops.

D.C. Mayor Muriel Bowser, a Democrat, wrote a letter to the Trump administration’s then-acting defense secretary, Chris Miller, in which she also rejected the presence of federal troops that day.

Previously, many congressional Democrats and media outlets spent almost two years asserting that evidence was right around the corner to demonstrate that a conspiracy existed between the Trump campaign and the Russian government to influence the 2016 election in Trump’s favor.

After an 18-month investigation, a final report by special counsel Robert Mueller determined that there was no evidence of collusion between the Trump campaign and Moscow.

2. Fate of the Electoral College

Cheney and another committee member, Rep. Jamie Raskin, D-Md., are clashing over whether the panel should suggest abolishing the Electoral College as part of a legislative package, Axios reported Sunday.

Some Democrats also want to use the Jan. 6 committee as a pretext for pushing same-day voter registration, which congressional Democrats have promoted before, Axios reported.

According to Axios, Raskin argues that “if presidents were elected by a popular vote, this would protect future presidential elections against the subversion that Trump and his allies tried to pull off in 2020.”

But, the outlet reported, Cheney counters by saying “the committee will burn its credibility if it pushes for radical changes like abolishing the Electoral College.”

On other fronts, committee members back either reforming or scrapping the Electoral Count Act, the law that Trump and his legal team tried to use to reverse the outcome of the 2020 election through Congress.

U.S. Attorney Matthew Graves of the District of Columbia last week informed the Jan. 6 committee that he would not charge either former Trump White House chief of staff Mark Meadows or former social media director Dan Scavino with criminal contempt of Congress.

The Justice Department did, however, charge former Trump trade adviser Peter Navarro with contempt of Congress. Federal agents arrested Navarro at an airport where he planned to board a flight to Nashville. The agents put him in leg irons and “strip-searched” him, Navarro said.

“While today’s indictment of Peter Navarro was the correct decision by the Justice Department, we find the decision to reward Mark Meadows and Dan Scavino for their continued attack on the rule of law puzzling,” their statement says, adding:

Mr. Meadows and Mr. Scavino unquestionably have relevant knowledge about President Trump’s role in the efforts to overturn the 2020 election and the events of Jan 6. We hope the department provides greater clarity on this matter.

If the department’s position is that either or both of these men have absolute immunity from appearing before Congress because of their former positions in the Trump administration, that question is the focus of pending litigation.

Although former White House staff have clashed with the committee, several Trump family members have cooperated voluntarily with the Jan. 6 committee.

Donald Trump Jr. reportedly met with the panel for more than three hours in May. The committee made texts available from the day of the riot in which the former president’s son asks Meadows, as chief of staff, to persuade his father to make a statement condemning the riot.

Ivanka Trump, the former president’s elder daughter, spoke to the committee in April at its request. Her husband, Jared Kushner, met with the committee voluntarily in March.

The New York Times reported that Short had warned Pence’s chief Secret Service agent, Tim Giebels, that Trump was likely to publicly turn on Pence, which could put the vice president in physical danger. (Some participants shouted “Hang Mike Pence” during the riot.)

“Peril,” a 2021 book by Woodward and Costa, recounts a conversation between Trump and Pence the day before the riot in which Pence said that, as vice president, he did not have the constitutional authority to decline to count Electoral College votes.

“I wouldn’t want any one person to have that authority,” Pence reportedly told the president.

“But wouldn’t it almost be cool to have that power?” Trump asked, according to the book.

“No. I’m just there to open the envelopes,” Pence answered.

“You don’t understand, Mike, you can do this,” Trump told his vice president, according to the book. “I don’t want to be your friend anymore if you don’t do this.”

Republicans hope to release a report in “a matter of weeks,” and likely would preempt a final report from the Pelosi-appointed committee, Politico reported.