Teachers Explain How They Push ‘Gender Lessons’ on Young Children 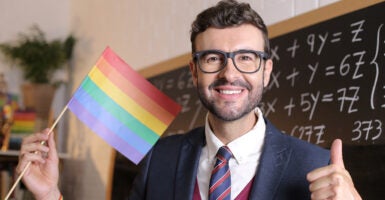 Teachers across the country are strategizing to inject gender-related discussions into their lessons. (Photo illustration: ajr_images/Getty Images)

Teachers across the country revealed the strategies they use to teach young children about gender ideology in a Friday article published by The Washington Post.

Teachers discussed the various ways they are injecting gender-related discussions into their lessons, including comments about using hormones to stop menstrual periods and declining to state that sexual anatomy is gender-specific, according to The Washington Post. One transgender teacher makes a point of telling students about the process of gender transitions, including with personal testimony.

“LGBTQ identities are a naturally occurring facet of human variation, and that is why we need to learn about them in the context of biology and human anatomy,” Sam Long, a biology teacher at Denver South High School, told The Washington Post. Long, who is transgender, frequently discusses gender ideology with students, teaches that gender is a spectrum rather than a binary, and shares his own sex-change experience.

Bill Farmer, a science teacher in Evanston, Illinois, teaches students that gender is a social construct, not a biological reality, he told The Washington Post. There are currently more transgender and nonbinary students in his classes than ever before—at least one or two per class—and approximately half of his school’s biology teachers cover these subjects.

“There’s not many spaces where students have the opportunity to engage in these discussions in a more structured way and where there’s a safe space to ask questions,” he told The Washington Post. “Most students are testing out or trying to figure out where they fall in their gender identity.”

One Massachusetts kindergarten teacher gives children lessons on pronouns, including gender-neutral pronouns “they” and “ze,” and introduces them to concepts including trans identities and “gender queer,” he told The Washington Post. He doesn’t fully define the terms because it would be “too much” for kindergarteners.

Kara Haug, a sex-ed teacher in the Sacramento area, claimed she didn’t bring up gender identity in her classes but would simply answer students’ questions when they arose, she told The Washington Post. When one student asked her if she could stop her period if she felt like a boy, for example, she explained how hormones work.

Several states require that school curricula include LGBT topics, and multiple curriculum plans addressing transgender and gender ideology have come into use in schools, according to The Washington Post.

One of these lessons, titled “Pink, Blue and Purple,” instructs teachers to ask first graders how they know what gender they are and then explain that gender identity is a feeling and is not based on one’s body parts. It was developed by Advocates for Youth, a youth-oriented sexual health group.

Haug, Farmer, Long, and Advocates for Youth did not immediately respond to The Daily Caller News Foundation’s request for comment.