The Fraud That Dare Not Speak Its Name 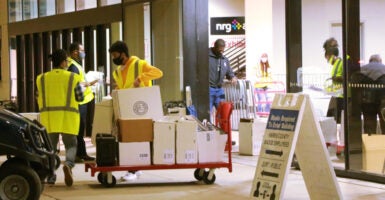 Dinesh D’Souza’s new documentary “2,000 Mules” raises serious questions about possible skullduggery in the 2020 election, involving absentee ballots across multiple states. But neither the liberal media, nor election officials, nor law enforcement seem to have much interest in investigating that potential wrongdoing.

The reaction has largely boiled down to “nothing to see here!” or else to so-called fact checks that criticize the technology used to analyze the problems the film documents, rather than actually use the information D’Souza presents to investigate the credibility of the claims being made.

But that is par for the course these days when it comes to potential election fraud, or even proven fraud.

A recent article in the Washingtonian says The Heritage Foundation’s Election Fraud Database, a national tracking system for potential fraud, is a “highly controversial tactic.” So just tracking and reporting cases where individuals have actually been convicted of election fraud in a court of law is now “highly controversial.”

The media’s refusal even to address or examine the issue is quite a change from the days when the Miami Herald won a Pulitzer Prize for in-depth investigation of the Miami mayor’s race in 1997. The Herald revealed so much fraud (some of it involving absentee ballots) that the election was overturned by a court.

In “2,000 Mules” (in which I am interviewed as an authority on election fraud), D’Souza relates the story of how True the Vote, an election integrity organization based in Texas, obtained and analyzed, at enormous expense, 10 trillion cellphone geotracking signals from the final weeks before the 2020 election.

True the Vote was able to isolate specific cellphones that traveled to the locations of the ballot drop boxes that liberals insisted had to be installed because of the COVID-19 epidemic. This was an inadequate reason to implement such an unsecure, unregulated system, so obviously vulnerable to fraud. Even quarantined voters could simply drop their ballot in a mailbox. Yet when these objections were raised at the time, they were ignored.

Of course, lots of ordinary voters did travel to drop boxes to drop off their ballots. Therefore, True the Vote isolated its search to cellphones whose owners appeared to visit more than 10 drop boxes, a very suspicious occurrence for which there does not seem to be a legitimate explanation.

These same cellphones repeatedly visited the addresses of the same five or more liberal nonprofit groups, although they are not named or identified in the documentary. Even if geotracking technology cannot yet specify exact locations, these patterns of behavior at least raise questions, especially when combined with video footage of late-night ballot-box visits.

Who were these individuals, the so-called mules, and what were they doing? Where did they get these ballots? Why were they repeatedly going to absentee-ballot drop box locations? Were the ballots legitimately obtained, or were they fraudulent or stolen from voters, or were voters intimidated, pressured, or coerced to hand over their ballots? Who was paying them to engage in this behavior, particularly in states like Arizona where vote trafficking—having third parties pick up and deliver absentee ballots—is against the law?

D’Souza’s analysis indicates that the 2,000 mules were on average visiting 38 drop boxes, sometimes in the middle of the night, and often inserting multiple ballots. True the Vote obtained 4 million minutes of video surveillance footage, where it existed, of some of the drop boxes.

The documentary is able to show who some of these mules were and what they were doing by coordinating the cellphone tracking data with the time they appeared at a drop box and the video surveillance. D’Souza presents one interview in which an anonymous mule confirms that this sort of coordinated fraud does occur at least in some locations.

Some critics argue that this type of data does not show without a doubt whether the phone owner walked to a specific drop box within a few inches. But no triangulation is that precise on its own, hence the necessity for layering—which this movie appears to do.

This is, after all, the same type of data used every day by big internet companies like Google to track our movements for all kinds of purposes, as well as by law enforcement authorities to answer 911 emergency calls made from cellphones.

By estimating the number of ballots stuffed into drop boxes by these mules in several key states like Georgia and Arizona, and corroborating with the video surveillance, D’Souza raises serious questions about the legitimacy of large numbers of votes in those states—enough to affect the final outcome. Are his claims credible?

The only way to answer that question would be to do what only law enforcement, and not a filmmaker, can do: identify the mules using the video footage and geotracking data, pull them in before a grand jury or call them in for questioning, and get answers—under oath—to all of the questions this analysis raises. The same goes for the nonprofit organizations that were apparently organizing this conduct.

Of course, enterprising reporters like the Miami Herald crew who helped the newspaper win a Pulitzer Prize could also use the documentary to try to identify and interview some of these mules and the staff at these nonprofits if they really wanted to get at the truth.

If we still had a healthy fourth estate in this country, that would be a great job for them. But apparently there isn’t anyone left in mainstream journalism interested in the truth when it comes to election issues—just regime flunkies paid to criticize D’Souza, or anyone else who even broaches the topic.

This article was originally published in The American Mind.