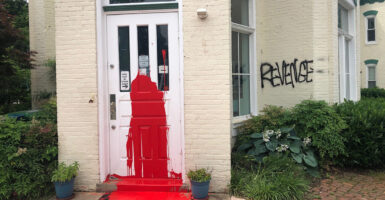 The Blue Ridge Pregnancy Center in Lynchburg, Virginia, was vandalized by pro-abortion militants. The attack early Saturday was the latest of many such attacks nationwide. Pictured: A pregnancy resource center in Washington, D.C., that was attacked June 3. (Photo: Evalyn Homoelle/The Daily Signal)

The center’s front door was splattered with red paint and the words “Jane Says Revenge” were spray-painted on the side of the building.

“I got a phone call from a neighbor across the street from the pregnancy center about the graffiti and the paint falling on her front door,” Janet Durig, Capitol Hill Crisis Pregnancy Center executive director, tells The Daily Signal.

Durig says she immediately called the police when she heard that the center had been vandalized.

The graffiti likely refers to a group called Jane’s Revenge that has claimed responsibility for two attacks on pro-life organizations. This year, the group took credit for throwing Molotov cocktails into the offices of the Wisconsin Family Action in Madison, Wisconsin as well as vandalizing a pro-life center in Seattle.

The group derives its name from an underground abortion network operating in the late 1960s and early ’70s out of Chicago called the Jane Collective.

Durig mentioned this had never happened to the center before.

“At first, I was sad. And now I’m just saying that the times, I guess,” she said.

“It’s sad that somebody feels they have to do this when we help so many people,” Durig added later.

Durig says they won’t stop supporting women who need help during their pregnancies and hopes that others will continue to aid them in their work.

“I would like people to focus on the fact that we help women,” she said. “We don’t just visit with them one time if they want to come back. There’s all sorts of programs that help them grow as mothers. And fathers, by the way.”