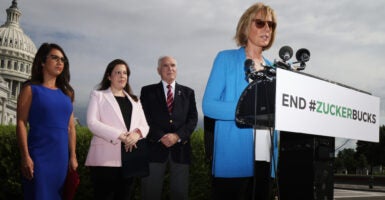 President Joe Biden’s executive order spurring an “all of government” approach to registering voters could raise questions about whether the effort squares with a law prohibiting political activity on federal property.

“We’re looking at potential Hatch Act violations,” Tenney said last week in an interview. “We have these former political operatives now, and actually even government agencies, engaging in political operations to get votes out, which are roles reserved to the states and not to these federal operatives.”

The Hatch Act prohibits federal employees from engaging in partisan political activity while on duty and while in government offices, wearing government uniforms, in government vehicles, or using taxpayer dollars.

Congress passed the law in 1939 after a scandal in which executive branch officials in President Franklin Roosevelt’s administration threatened to withhold benefits and loans to those who didn’t vote Democrat, and promised jobs to those who did vote Democrat. The law is named for its sponsor, the late Sen. Carl Hatch, D-N.M.

Since Biden issued the order in March 2021, several agencies have responded by outlining actions they will be involved in. These include:

Biden’s order states that agencies will “promote voter registration and voter participation” and will be “soliciting and facilitating approved, nonpartisan third-party organizations and state officials to provide voter registration services on agency premises.”

The order is similar to recommended executive actions on voting from Demos, a liberal nonprofit. Demos did not respond to a request for comment for this report.

Government agencies working with outside organizations that have a political bent is concerning, Tenney told The Daily Signal.

“It really concerns me that there’s a blurred line between these federal agencies and even funding agencies. And we’re even funding salaries within the federal government by the taxpayers to engage in political operations like Demos and others,” Tenney said in the May 24 interview.

“It’s really unacceptable. It should be struck down. And we should be suing over these [issues and] we know that there’s lawsuits either filed or pending on these issues,” the New York Republican said.

The Biden administration needs to be more transparent, said Stewart Whitson, legal director for the Foundation for Government Accountability, an ethics watchdog group. But based on what is known, Whitson said, the president’s executive order potentially violates the Hatch Act.

“Executive Order 14019 seems designed to target voters that are more likely to vote Democrat,” Whitson, a former FBI supervisory agent, told The Daily Signal. “Voter participation means voter mobilization. If the federal employees are engaged in getting people to the polls, that is political activity.”

“It was based on a 1939 scandal where the national Democratic Party was using the government to get more votes,” he said. “This is strikingly similar.”

Hans von Spakovsky, a former Justice Department lawyer who is a senior legal fellow at The Heritage Foundation, previously told The Daily Signal that the president’s order poses problems under the Hatch Act. (The Daily Signal is Heritage’s multimedia news organization.)

“If an individual is dealing with government—whether for Social Security, Medicaid, or veterans benefits—when a government clerk tells them to register to vote,” von Spakovsky said, “the typical reaction for someone getting government benefits is: ‘I better vote for the party in power, or my benefits will be denied.’”

Whitson said Biden’s order also could prompt violations of the Antideficiency Act, which prohibits federal employees from obligating tax dollars not authorized by Congress and prohibits any federal agency from accepting voluntary service from individuals.

The executive order refers to working with “third parties” and “nonprofit organizations” to assist in increasing voter registration and participation.

The president’s order also could lead federal employees to violate the National Voter Registration Act, a 1993 law better known as the Motor Voter Law, Whitson said. That law authorizes federal agencies to engage in specified activities to ease voter registration, but Biden’s order extends beyond the boundaries of the law, he said.

The White House did not respond to The Daily Signal’s inquiries for this report.

The Biden administration unsuccessfully pushed Democrat-sponsored voting initiatives in Congress that would have nationalized election administration, which traditionally has been a state responsibility.